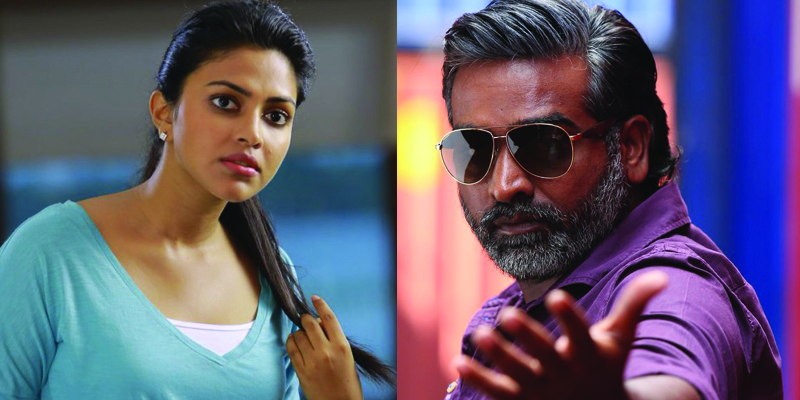 Actress Amala Paul joins veteran actor Vijay Sethupathi for the forthcoming untitled film, which is famously called VSP 33.
The actress Amala Paul took to her social media profile and wrote a heartfelt note, expressing her excitement and gratitude for the film. She shared, “‏So happy to be associated with @roghanth Sir, Congrats on materializing this soulful dream! Thx @ChandaraaArts & @CineInnovations for the opportunity,  looking forward with all my heart to work alongside the finest actor in our industry today @VijaySethuOffl…Thx for all your wishes.”
The movie will have Amala Paul paired with Vijay Sethupathi for the first time in her career.
Actor Vijay Sethupathi, who is busy with multiple projects, was last seen in Super Deluxe and his next release Sindhubaadh is getting released next week. The actor has signed the debut directorial venture of Venkata Roganth Krishna, a former associate of director SP Jhananthan, and this movie will be produced by Esakki Durai in Chandaraa arts.
Vijay Sethupathi and Amala Paul play music composers in this movie that also stars a foreign actress, and the love and conflicts between the trio is what the movie is all about.
Tentatively being called as VSP 33, the movie has music by Nivas Prasanna, and begins shooting in Palani and Ooty.
Tags
amala paul media multiple projects SP Jhananthan Super Deluxe Vijay Sethupathi VSP 33
0 Comments
Editorial June 14, 2019
Share
Tweet
Share
Pin
Popular Posts

Next Film Based On The Founder Of Bangladesh Confirms Shyam Benegal

Nayanthara to sizzle with Vijay Sethupathi!