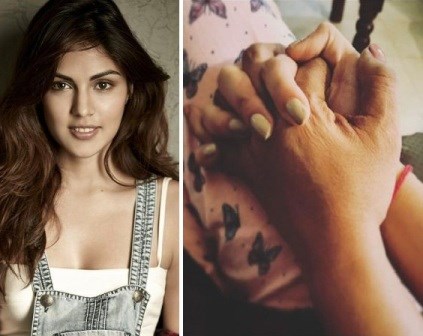 Almost after 27 weeks later diva Rhea Chakraborty is back on social media and celebrates International Women’s Day by sharing a beautiful message for her mother.

Rhea was away from social media for more than six months as she was arrested by NCB amid the ongoing Sushant Singh Rajput death case and spent her time in jail too.

On the occasion of International Women’s Day 2021, Rhea broke her social media silence by sharing a photo holding her mom Sandhya Chakraborty. She put out a strong message and this is her first post since August 2020.

Meanwhile, in the SSR death case, 33 people have been named on the charge sheet. Among those who are mentioned in the charge sheet include Rhea Chakraborty and her brother Showik Chakrabarty. Sushant’s former manager Samuel Miranda and household help Dipesh Sawant have also been named.

On the work front, Rhea might be seen in forthcoming Chehre, also starring Amitabh Bachchan and Emraan Hashmi.

Rhea Chakraborty started her career as a VJ on MTV India. She made her acting debut with the 2012 Telugu film Tuneega Tuneega and later appeared in the Hindi film Mere Dad Ki Maruti (2013).