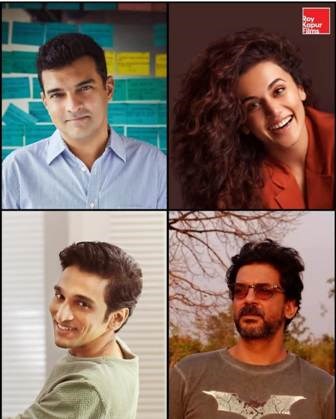 Roy Kapur Films just announced their next movie starring Pratik Gandhi and Taapsee Pannu in the lead roles. The film is titled Wo Ladki Hai Kahaan, the movie will be helmed by Arshad Syed.

The official handle of Roy Kapur Films confirmed the news. It tweeted, “Happy to announce our next production, a madcap comedy filled with twists and turns in the search for a missing ladki! #WohLadkiHaiKahaan? starring @taapsee and @pratikg80, produced by #SiddharthRoyKapur and written & directed by @justarshad. On the floors soon!”

The film is an investigative comedy where Taapsee will be seen playing the role of a cop who meets a spoilt brat played by Pratik. ‘Woh Ladki Hai Kahan?’ is written Arshad Syed who also wrote famous films like Karan Johar’s ‘Student of The Year 2’ and Abhishek Bachchan starrer web series ‘Breathe: Into The Shadows’. This will also mark Arshad’s directorial debut, meanwhile, it is being produced by Sidharth Roy Kapur.

Pratik Gandhi who shot to fame with web series Scam 1992: The Harshad Mehta Story also took to his social media profile and shared the news. He wrote, “Hitting the road along with @taapsee in search of a missing ladki! Get ready for a riotous ride!#WohLadkiHaiKahaan? produced by #SiddharthRoyKapur, @roykapurfilms and written & directed by @justarshad. On the floors soon!”

Meanwhile, on the work, Taapsee Pannu has quite a few films in her kitty, such as Looop Lapeta, Rashmi Rocket, Haseen Dillruba, Shabaash Mitthu and more.

As for Partik Gandhi, he is busy with Ravan Leela and Atithi Bhooto Bhava.