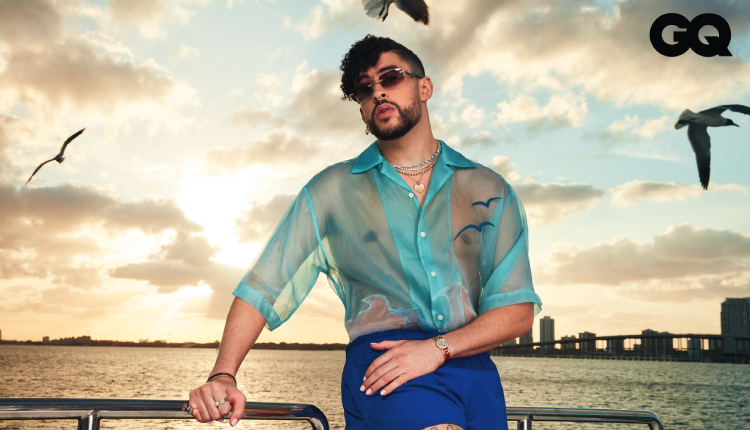 In the six years since he quit his job bagging groceries, Benito Antonio Martínez Ocasio has become one of the most streamed artists alive, a professional wrestling champion, and a whole new kind of cliché-shattering sex symbol. Now, the Puerto Rican superstar is poised to make his next big jump: to Marvel leading man.

Bad Bunny, whose real name is Benito Antonio Martínez Ocasio, is here with his girlfriend, 28-year-old jewellery designer Gabriela Berlingeri, and their three month-old Beagle puppy, Sansa. As Benito talks, his demeanour shifts from shy and introverted to playful and goofy to voluble and defiant. Sometimes, he gets sentimental. He turns to Berlingeri at one point and murmurs, “You look so pretty right now.” And she laughs and says, “Oh, yeah, I look really pretty.”

His boldly coloured outfit feels tropical and refreshing, transmitting a summer energy—but he explains that his approach to style is always shifting. “It depends on my state of mind,” he says. “Everybody has to feel comfortable with what they are, and how they feel. Like, what defines a man, what defines being masculine, what defines being feminine? I really can’t give clothes gender. To me, a dress is a dress. If I wear a dress, would it stop being a woman’s dress? Or vice versa? Like, no. It’s a dress, and that’s it. It’s not a man’s, it’s not a woman’s. It’s a dress.”

Released on 6 May, Benito’s latest record, Un Verano Sin Ti (A Summer Without You), is less political, but his sensibility remains as proudly Latin as ever; a large portion of the album was recorded at a house in the Dominican Republic. “I go to a specific place with my people, and we stay, we have a good time, and we work,” he says. “I rent a house like this one, put the equipment in, and record the songs there.” He avoids recording studios whenever he can. “From the moment I get in the car, I lose the desire to go,” he adds. At the house, though, everything flows. “Here, you get up, you eat something, and we get on it.”

In January, Benito deleted all of his social media posts and put up a reel of himself and Berlingeri eating dinner under a palm tree, in which he announced his upcoming World’s Hottest Tour. The shows sold out in minutes, crashing the system. “It was madness,” he says.

Today, in mid-April, it’s been only a week since his last show and he hasn’t fully come down. Usually, he goes to bed at 1 or 2 a.m. and wakes up around 10, but lately he’s been having trouble sleeping. “I don’t know if it’s just me or everyone, but the higher I go, the more pressure I feel,” he says.

And he’s certainly continuing to soar ever higher. Later in April he was tapped to star as El Muerto, the Spider-Man antagonist and superpowered wrestler who is the first Latin Marvel character to get a stand-alone live-action film—the latest chapter in a burgeoning acting career. “Maybe, for some people, it’s different in that the higher they go, the less pressure they feel, because maybe they’re confident that everything they do will be a success,” he continues. “But

I’m the opposite—the more I acquire an audience, the more I go up, the more pressure I feel to keep going. Sometimes, I can’t sleep thinking about that. I go days without sleeping.”

Social media has allowed him to present himself on his own terms—defiantly Puerto Rican, playfully gender-neutral, and politically outspoken. “I was never on a mission to be like, Oh, this is what I’m going to do,” he says about conquering the global pop market. “It happened organically. Like, I’ve never made a song saying, ‘This is going to go worldwide.’ I never made a song thinking, Man, this is for the world. This is to capture the gringo audience. Never. On the contrary, I make songs as if only Puerto Ricans were going to listen to them. I still think I’m there making music, and it’s for Puerto Ricans. I forget the entire world listens to me.”

The more famous he’s become, the more Benito has come to appreciate his language, his country, his culture, his family, and his friends. “Many artists become famous, and they suddenly start to change their circle of people, and then people start to filter through,” he says. “Like, ‘Now, I’m closer friends with so-and-so. Now, I’m better friends with this one because he also has money.’ I continue to surround myself with the same people. I keep my same circle. I’m always in contact with my family, even when I can’t see them.”

Privacy is crucial now that his life is on constant display. “I mean, I’ll post a photo with Gabriela,” he says, “but I’m not making a love story. I post photos because it’s the fucking thing you do during these times—posting pictures. Sometimes, as much as you’re anti–social media, it’s impossible. As much as you say, ‘I’m going to stay out of this,’ you’ll suddenly say, ‘I’m going to post a photo,’ you know?”

Benito attended the University of Puerto Rico at Arecibo, intending to major in visual communications. In his first semester, he failed all his classes except the ones in his major. “And I passed maths,” he says. He was writing songs but not recording them. “I always made rhythms, tracks, beats. I was clear that I wanted to be an artist, but I wanted it to be serious. Like, I’m working seriously. It’s not like I’m here trying to do crazy things. That’s why I didn’t upload songs until I felt as prepared as possible, at the flow level, at the rhythm level, at the lyric level.” Around 2014, before he dropped out of school, Benito took a job bagging groceries at a supermarket chain. That’s when his friend Ormani Pérez, now his official DJ, pushed him to upload some tracks to SoundCloud.

Benito has been the most streamed artist on Spotify for two years running. His tour earlier this year sold 500,000 tickets in the first week and grossed almost $117 million. And after a recurring role on the Netflix series Narcos: Mexico, he filmed the movie Bullet Train with Brad Pitt. “Brad Pitt was super fire,” Benito says. “Sometimes, during filming, they’d yell ‘Cut!’ and I would think, What the fuck. I’m here with Brad Pitt!”

“Latino culture is very machista,” Benito says. “So, that’s why I think everything that I’ve done has been even more shocking.… Urban Latin music, reggaeton, is a genre where you have to be the manliest, the baddest. That’s why it’s the most shocking too.” Sometimes, he says, people think
that if you’re a reggaeton artist, you have to act or dress a certain way. “But why? If I dress this way, I can’t sing this way? Or if I dress like this, I can’t listen to this type of music?”

But he’s not trying to be an example. “It’s not like I’m making a sermon. I’m going to a club, or being with friends. It’s natural. So, when somebody listens to it and says, ‘Cabrón, it’s true,’ and it changes their mind a bit, it’s not like they’re going to be a new person, but they acquire something. They might start accepting things that they hadn’t, or they might suddenly say, ‘Damn, it’s true, I’m being a little unfair with this person.’”

“Obviously, there are a lot of things that people won’t know about me because I have my private life,” he says at another point. “I might not speak about some things in public. But when I go out there, I’m not acting, you know? I’m not making up a character, or becoming more of an artist, or changing the way I speak or anything. I’m the way I am, and I’m proud of how I am, and I feel fine with who I am.”

Pre-bridal Skin Care Tips for all the bride-to-be