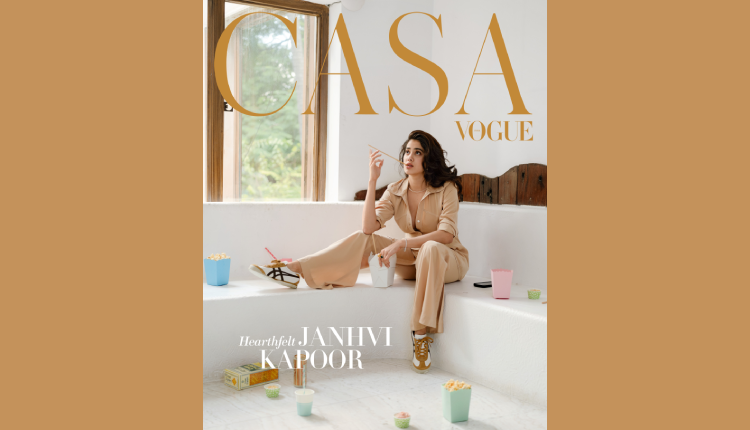 When Janhvi Kapoor opens the heavy wooden gate to her Chennai bungalow, the actor’s trademark doe eyes crinkle with unbridled joy. This is the first home that was bought by Sridevi. It’s one of the reasons why the family has since been fiercely protective of their holiday home, keeping its doors firmly shut to fans, media and paparazzi alike. That is until Boney Kapoor took it upon himself to oversee its renovation personally, and, a year and a half ago—on Khushi Kapoor’s birthday—finally gave his daughters the green light to visit and bring their friends along. The sisters, who had previously been unable to deal with their mother’s memories, even staying at a hotel while in Chennai for Sridevi’s prayer meet felt a strong pull towards their childhood home and found themselves eager to return.

During my conversation with Janhvi Kapoor, the words “this is my favourite part of the house” come up rather frequently, which is understandable considering the sentiments tied to the abode in question. It is capacious, sure—not an anomaly for a celebrity home—but it clearly was Sridevi’s pride and joy when she purchased and breathed life into it before her marriage to Boney Kapoor. A verdant front yard teeming with variegated species of plants and trees, among which sit an ornate marble bench and table, greets me upon entering. “This is actually one of my favourite spots in the house,” says the 25-year-old actor, pausing to fold her hands in obeisance to the Ganpati statue placed adjacent to the lawn. “I have such fond recollections of the time I spent here with mum”.

Kapoor then leads me through a set of understated glass doors (“the Vastu entry because I care what you think of me”) to a spacious living room which is suffused with a warm, yellow glow. The first thing that catches my eye is the sheer number of artworks lining the walls. This cornucopia of treasures—comprising enormous paintings, intricate artefacts, tasteful textiles and exquisite sculptures—I am informed, were personally collected by the late actor on her travels or sourced from local artisans in Chennai.

Upstairs, at the landing of the first-floor staircase, is perhaps the home’s cynosure: a memorabilia wall made up of family photos, from Sridevi dressed as Charlie Chaplin in Mr India (1987) and her wedding photos with Boney Kapoor, to family portraits and Janhvi’s Koffee with Karan debut with her half-brother, Arjun Kapoor. “I think my favourite photos are definitely the ones of mum and dad from before I was born,” Kapoor beams.

Passing through the TV room—where the Kapoor sisters spend most of their time catching up on movies—Janhvi ushers me into her bedroom, which interestingly used to be Sridevi’s room before she got married. There’s a large vanity table in one corner of the room that is portentous of Kapoor’s rising celebrity, but the space otherwise sidesteps all the trappings of ostentation. The bed is simple, a rustic wooden headboard giving it character; a set of jewel-toned armchairs in another section produces an aura of regality. But the young star is clear about getting no work done here. This is her sanctum of solace where “I wake up, go to the gym, watch movies, sit with my cousins and eat great food. Every time we’d go to Chennai, for as long as I can remember, the whole family would put on three to four kilos during each visit.

Another flight of stairs later, we’re introduced to two more bathrooms—again Kapoor’s favourites because of the “stone basins and Grecian-Moroccan vibes”. When I point out to Kapoor that she has branded almost every room of the house with her superlative stamp of approval, she smiles wistfully. “We grew up knowing mum cherished this place so much. It was her safe space, and now it feels like ours; it’s almost as if nothing bad can happen to us here. How can I not love all of it with all my heart?”

Janhvi Kapoor’s home in Chennai is a living monument to Sridevi’s memory Returning to her holiday abode in Chennai, surrounded by everything her late mother treasured and her father painstakingly restored, actor Janhvi Kapoor realises the power of a home built with love.

“I think Abhishek Bachchan is a very giving actor, he gives you your space” says Naveen Kasturia on his experience working with the Breathe: Into the Shadows co-star

5 Ways to Have a Taller Look

Be ‘wedding season’ ready with these must-haves in your bag

Upgrade Your Wardrobe With Femella’s Cosy and Vibrant Winter Collection