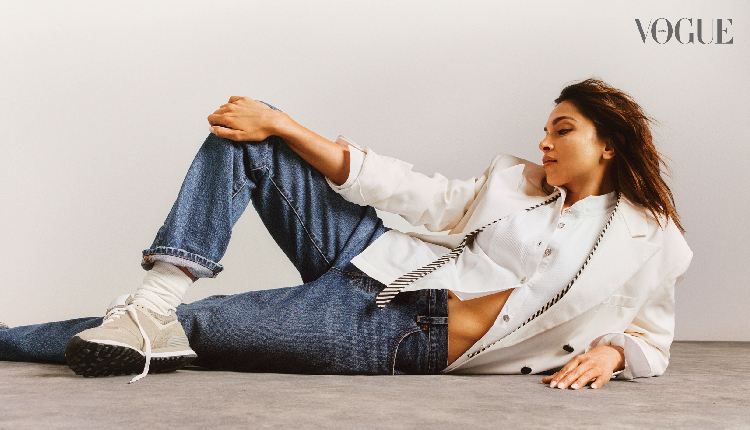 Deepika Padukone has racked up a long list of achievements since her blockbuster Bollywood debut 15 years ago—including an association with iconic fashion maison Louis Vuitton—but refuses to rest on her laurels. The actor discusses acting, accolades and aspirations with journalist FAYE D’SOUZA

Faye D’Souza: As seen with Gehraiyaan (2022), you seem to be consciously gravitating towards strong female characters that are written with depth. But there was a time not so long ago when major projects were made keeping A-list male actors in mind. As one of the country’s biggest stars and a successful producer, do you now insist on having well-rounded female characters in the films you act in and choose to back?
DP: I’m having the opposite problem today, where I have to insist on filmmakers not keeping me in mind for just a certain kind of role. They are doing their own filtration and sieving process before approaching me. A lot of the time, I hear of a film going to someone else and wonder why it wasn’t me, and the filmmaker will just tell me that they thought I wouldn’t do it because it didn’t have a big enough part for someone like me. Of course, it could also just be an excuse for why they didn’t want me in the first place. But to answer your question: no, I don’t think I’ve had that issue in a while. People assume that I’m only going to do certain kinds of films and roles, so I only get offered those.

FD: We’ve come such a long way from how mental health used to be portrayed on-screen. Today, characters are being written with more research and a better understanding of the various mental illnesses people suffer from. How much further do you think we need to go in terms of a more thorough portrayal of mental health in Indian cinema? And how will we get there?

DP: With understanding and empathy. If an actor were portraying a character with a physical ailment, for example, they would do their research and due diligence in order to discern exactly how to depict their condition. The same courtesy needs to be extended to mental illnesses. Actors, writers and directors shouldn’t be winging it. We should afford the same honesty and authenticity to characters with mental illnesses as we do to biopics. Cinema is such a powerful medium of understanding. If mental health is depicted in the right way, it can have far-reaching consequences for a country like India, where the conversation around mental health has only just begun. Similarly, one wrong depiction could set us back by years.
Something I personally hope to do in the next few years is to have a therapist present on film sets.We have a doctor on set, so I don’t see why we can’t have a mental health professional too. During Chhapaak (2020), I brought on a therapist for myself because there were days where I would have a panic attack or feel claustrophobic—it wasn’t easy carrying the emotion that came from playing Malti for so many months. To have a therapist hold my hand through that was important to me. In fact, I had a similar process for Gehraiyaan as well. I have already started doing this at an individual level, but as a producer I would like to make therapy available to the whole crew.

FD: Let’s talk about your international career. You made your Hollywood debut with xXx: Return of Xander Cage in 2017 and, in August 2021, announced that your next project would be a sweeping cross-cultural story. What kind of stories are you hoping to tell a global audience that will put diversity front and centre?
DP: Right now, the conversation around diversity in Hollywood is surface-level. The minute you have a Black or Asian actor, it’s considered ‘diverse casting’. But we have a long way to go before we start seeing substantial change. I feel like 80 per cent of the people in charge are still looking at inclusive casting as a box to be ticked. No doubt, there are some who are genuinely interested in turning the tide, but they are getting it quite wrong. It’s a learning process and I hope it’s an earnest one.

FD: Between your association with Louis Vuitton, descending on the red carpet in experimental high fashion and being papped in oversized tees and sweats, what is your personal style actually like?
DP: All of it is me. I am the person who will wear a classic black dress, I am the person who will wear a neon green or fuchsia gown that can fit ten people in it and I am the person who will wear a graceful sari. They are all my personalities. On a daily basis, like everyone else, I am most comfortable in pyjamas. I am also completely at ease in a sari. But at the same time, I love my gowns and heels. Even when it comes to colour, I know I’ve always come across as being partial to neutrals, but I love that pop of green or pink. And for those wondering, it has nothing to do with Ranveer coming into my life. It’s a part of my personality that has always been there.

FD: Let’s wrap up on a light note. Your Instagram feed is quite breezy—very different from the meticulous, student-like seriousness you bring to set. Would you say there are two sides to you?
DP: Nobody is just one person; that would be so boring. I wouldn’t say I’m a serious person, but I am extremely disciplined. It’s the athlete in me. People think of me as this poised and elegant woman with swan-like grace and legs for days. And while that is definitely a part of who I am, it is but one side of me. The other side, which people are seeing on Instagram these days, is how I am around Ranveer, my sister and my friends. I have a bad sense of humour. I am goofy. I like to have fun. They’re all me and I am all them.

Spark your children’s creativity with Merlinwand’s new book, The Unusual Adventures of a Gutsy Explorer

Simple Ingredients from Your Kitchen to DIY a Facial Scrub