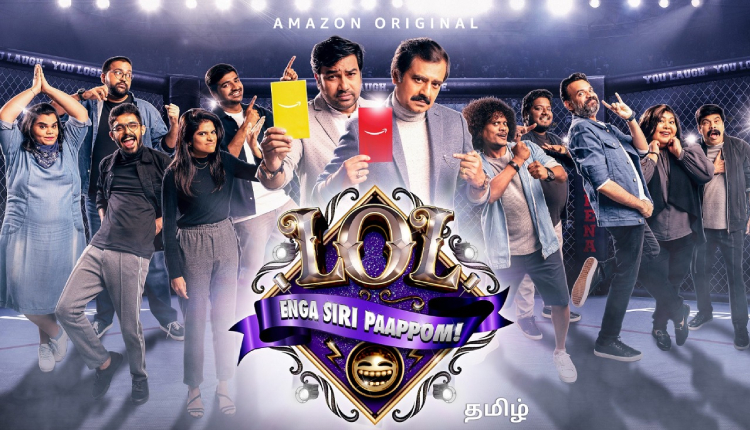 If there is one thing that lightens up the mood it is humour indeed. But what happens when you put the best of the best comedians under one roof, get them to joke and tell them to not laugh? Well one of them stands a chance to win 25 lakhs on Amazon Prime Video’s original comedy reality show LOL: Enga Siri Paapom. But the task isn’t quite easy with 24 cameras and two legendary judges watching them with hawk-eyes.

Set to be launched tomorrow, August 27th, Amazon Prime Video, LOL: Enga Siri Paapom is an unscripted comedy reality show that features Tamil Nadu’s 10 funniest comedians and entertainers competing against each other for six consecutive hours with two objectives- to make others in the house laugh and ensure that they do not laugh themselves. There is however only one simple rule – you laugh, you lose! Thank god this rule doesn’t apply for the viewers, as that would be impossible! So here are five exciting reasons to stream LOL: Enga Siri Paapom on Amazon Prime Video:

LOL in this case stands for ‘Last One Laughing’, a concept that was originally developed in Japan, and adapted later in countries like Australia, Mexico, Germany, Italy and Canada. The idea is simple: 10 comedians are locked up in a house for 6 hours, with a mandate to make their co-contestants laugh, all while keeping a straight face. If they laugh, they lose, until the last comic remains. Plus, thanks to the show’s original format, we don’t just LOL at our favourite comics but also get to know them a little more (as they struggle not to laugh, themselves).

If there is one South Indian actor who has unanimously won hearts it definitely is Padma Shri Actor Comedian Late Vivekh. This out and out comedy show has Vivekh Sir at the helm, judging and encouraging contestants to show off their comedy skills. His impeccable comedy timing, witty one-liners and his radiant on-screen presence are sure to make each one of us reminisce about this iconic actor. His camaraderie with Actor-Comedian Shiva as the co-judge makes this show a binge-fest.

The comic line-up is incredible

No matter what kind of comedy you like – from stand up and improv to witty one-liners, the fabulous combination of comedians and entertainers on the show will have you in splits. The list includes Maya S Krishnan, Abhishek Kumar, Premgi Amaren, Harathi Ganesh, RJ Vignesh Kanth, Sathish, Pugazh, Powerstar Srinivasan, Baggy (Bhargav Ramakrishnan), and Syama Harini – a riotously funny bunch. And considering that they’re competing against each other, we can only imagine how hard they have to work to up their comedic skills.

Making an audience laugh is one thing – but making your own industry peers laugh? Now that’s a challenge worth our time for sure.

We all could use a dose of humour now

The last two years have been incredibly uncertain. If there is one thing that is keeping us afloat it is the lighter, funnier side of things to life., LOL: Enga Siri Paapom promises unlimited fun and to watch these comics hold back a laugh while bringing their A-game to the table is a true treat to cheer everyone up in these difficult times.

It’s safe to say that the wide grinned emoji we all love so much was indeed inspired by Powerstar Srinivasan. To watch him put on a poker face in this comedy reality show is reason enough to binge-watch LOL: Enga Siri Paapom. From donning different characters to hitting out witty one-liners in his signature style, make him a tough contender on the show. Watch the show to find out how he competes with new-age talent like Syama, Abhisek Kumar, Maya Krishnan, Pugal and the rest.