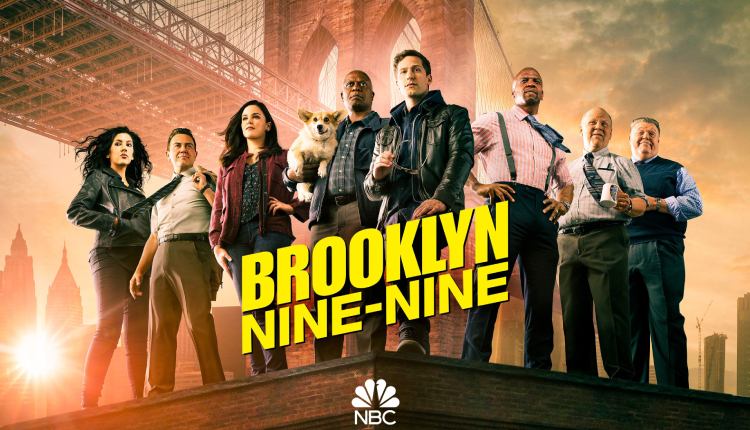 It’s been 9 years since the 99th Precinct came on screen and took the world by storm. To celebrate this momentous occasion, Comedy Central will be airing the entire Season 8 of Brooklyn Nine-Nine on 17th September, Saturday 1 pm onwards! After that, the show will be re-run from 19th September, from Monday to Friday.

Created by Dan Goor and Michael Schur, Brooklyn Nine-Nine is set in the fictional 99th precinct of the New York City Police Department in Brooklyn. It stars Golden Globe winner Andy Samberg as Jake Peralta, Emmy Award winner Andre Braugher as Raymond Holt, and Melissa Fumero as Amy Santiago. In Season 8 of the show, the squad deals with drastic changes in their lives brought about by the pandemic and protests by the people against the police.

Read more to find out the best moments to celebrate 9 years of Brooklyn Nine-Nine!

In Season 1 of the series, the first-ever Halloween marks the beginning of a yearly competition between Jake and Holt. Jake attempts to take Holt’s Medal of Valour from his office before midnight while Holt is adamant and tries to hide the medal in various places. There is a constant back and forth between the two and it only gets interesting as they have both challenged each other. To know who wins this challenge, watch Brooklyn Nine-Nine only on Comedy Central.

Jake Finally Stands Up To His Father

Jake’s father Roger Peralta has always been an absent parent who infrequently reappears in his life. In one of the episodes, Roger Peralta comes to town to spend some time with his son. Jake’s BFF Charles doesn’t seem to be happy about it and is skeptical of Roger’s intentions. It’s after a while that Jake realises his father’s cruel intentions of coming back in his life and stands up to him. Holt feels extremely proud of Jake and his courageous move.

The Halloween Heist in Season 5 of Brooklyn Nine-Nine is a special one as Jake plans a surprise proposal for Amy amidst the heist. This heist is declared open to everyone with the aim to steal a cummerbund. The chaos and the excitement of the heist takes a romantic turn as Amy discovers the cummerbund and reads the inscription ‘Amy Santiago will you marry me?’ on it. It’s one of the most cherished moments of Brooklyn Nine-Nine that you must not miss out on.

A Happy Party That Turned Dull!

In Season 5 of Brooklyn Nine-Nine, both Jake and Amy are seen having fun at their respective bachelor and bachelorette parties. But Amy’s bachelorette party soon takes a different turn as a revelation about one of Amy’s past relationships is made to her friends group. Find out what this revelation is all about and how Jake celebrates his bachelor party with his friends only on the episodes of Brooklyn Nine-Nine Season 8.

The Wedding We Were All Waiting For!

After a very long wait, Jake and Amy are finally going to get married but their wedding is majorly threatened. Charles along with the entire squad jump in to help them out in any way they can. Despite all the chaos, the squad manages to get things right, arrange for a robot, and even get an old acquaintance to play the ‘guitar’ for the ceremony!

A Mole In The Precinct

Jake and Holt come to know about a spy in Holt’s office who is sent by Commissioner Kelly. The duo finds out that the spy is none other than Holt’s assistant. With a noicely curated plan, both decide to use the assistant as a spy on Kelly himself.

Jake and other officers gather to have fun at their last Halloween heist. The squad decides to forget all previous heist winners and to count the new winner to be crowned as ‘The Grand Champion of the Nine-Nine’. Meanwhile, Jake and Amy take this as an opportunity to make an important announcement. This heist is covered in two episodes, but as you can binge the entire season on Comedy Central, there won’t be any cliffhangers!

Tune in to Comedy Central to witness an experience that was faced by the police department of New York with binge-watch of Brooklyn Nine-Nine Season 8 on 17th September, Saturday, 1:00 pm onwards

If The Lord of the Rings: The Rings of Power was made in India; these Indian Film Actors would make for the perfect cast