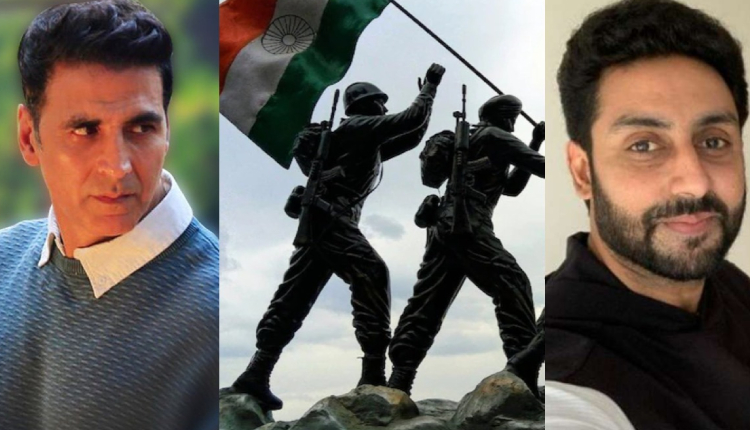 B-Town celebrities share beautiful and inspirational messages to celebrate Kargil Vijay Diwas – the day is observed each year to show respect and gratitude to the armed forces who sacrificed their lives during the Indo-Pak conflict in 1999.

Celebrities such as Abhishek Bachchan, Mohanlal, Rakul Preet Singh, Suniel Shetty along with many other took to their social media profiles and expressed their gratitude to the Indian armed forces.
Actress Rakul Singh wrote, “Salute to all the brave soldiers of the Indian armed forces who laid down their lives fighting for our nation Jai Hind #KargilVijayDiwas”

Veteran actor Mohanlal shared, “On this Kargil Vijay Diwas, let us not only remember our country’s remarkable victory but also pay homage to the valiant soldiers of our Armed Forces who sacrificed their lives in defence of our nation. #KargilVijayDiwas”

Actor Abhishek Bachchan wrote, “A day to remember the gallant efforts and sacrifices of the real heroes of the Kargil War. Thank you for shielding us, protecting us, and keeping us safe. Huge respect for all the Kargil warriors #KargilVijayDiwas #JaiHind

Kargil Diwas is celebrated every year on July 26 in memory of the servicemen who lost their lives in the 1999 Kargil War. It is a day to honour our brave fighters of the Indian Armed Forces who achieved the heights of Kargil from the Pakistani infiltrators.

‘Operation Vijay’ was initiated after Pakistani infiltrators captured the Kargil outposts in the winters of 1998-1999. It lasted for 60 days in Ladakh Kargil, India, throwing out the military forces of neighboring countries.