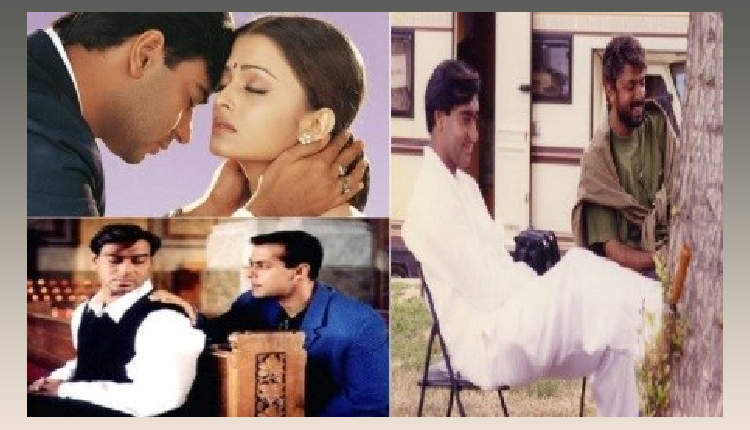 Actor Ajay Devng took to his social media profile and remembered the 1999 musical romantic hit, Hum Dil De Chuke Sanam, as the movie clocks 22 years of its release.
Helmed by Sanjay Leela Bhansali, the film starred Salman Khan, Ajay Devgn and Aishwarya Rai in the lead roles. Loosely based on Rashtriyashayar Jhaverchand Meghani’s play Shetal ne Kathe, the film narrates story of a newly-wed man who discovers that his wife is in love with another man and decides to unite them.
Ajay Devgn dropped working stills from the movie and wrote, “22 years of Hum Dil De Chuke Sanam; Salman, Sanjay, Ash & I knew we were making a super-sensitive film. Didn’t think though that it would create history. Humbled #22YearsOfHumDilDeChukeSanam #AishwaryaRaiBachchan  @BeingSalmanKhan #SanjayLeelaBhansali @bhansali_produc”
The film was a commercial success and emerged as one of the highest-grossing Indian films of the year; it received 17 nominations at the 45th Filmfare Awards.
Meanwhile on the work front, Ajay Devng is probably one of the busiest actor and producer in Bollywood right now. He will soon be seen in Sooryavanshi, Gangubai Kathiawadi, RRR movie, Maidaan, Bhuj: The Pride of India, Thank God, Mayday and more.
Ajay returns to direction with Mayday, the film also stars Amitabh Bachchan and Rakul Preet Singh.