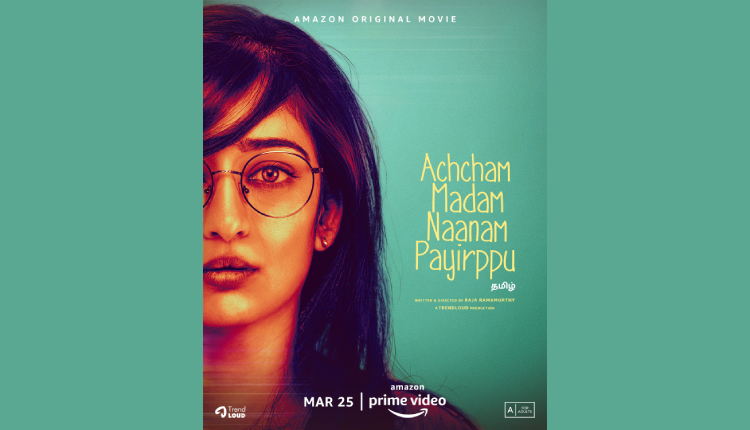 According to the popular adage, Achcham (Fear), Madam (Innocence), Naanam (Coyness), Payirppu (Chastity) are the four ‘ideal’ qualities that every good Tamil girl must possess. The film Achcham Madam Naanam Payirppu revolves around Pavithra, a 19-year old, who comes from a conservative background. She is in that awkward stage between being a curious teenager and a smart woman and struggles to strike a balance between societal expectations and personal desires.

“My excitement level is at an all-time high. I am thrilled that my directorial debut Achcham Madam Naanam Payirppu will be premiering on Amazon Prime Video,” said writer and director Raja Ramamurthy. “It is a very relatable story, narrated from a young girl’s point of view, which has never been attempted before in Tamil cinema. I worked with a predominantly female cast and crew, and their inputs helped bring to life the female perspective brilliantly. It was an absolute pleasure directing the young and highly versatile Akshara and a seasoned veteran like Usha Uthup and I am honoured to work with them in my very first film. I am confident that viewers across the country will enjoy our labour of love.”

“When Raja narrated the story to me, I instantly knew I wanted to be a part of this film. Achcham Madam Naanam Payirppu is a slice-of-life, light-hearted watch. It’s a coming-of-age drama where a young girl struggles to find a balance between her desires and family pressures. I believe that every young adult will relate to my character in the film,” said Akshara Haasan. “I am absolutely elated with the love and appreciation the film has received at several international film festivals and I am certain that Prime Video viewers across the country will enjoy this film.”

“Achcham Madam Naanam Payirppu is truly special for me, as it marks my return to Tamil cinema after a decade,” said Usha Uthup. “I am playing the role of Akshara’s grandmother in the film who is also a veteran Carnatic singer so I got to do some singing as well. I am quite thrilled with the way the film has turned out. Not only is it an entertaining watch, but also has a very important message for the audience- to be honest with yourself and your feelings. I am so happy and excited that Achcham Madam Naanam Payirppu will be streaming on Amazon Prime Video.”

National Geographic in India to premiere ‘Ganga: The River from the Skies’, a documentary focusing on the efforts of National Mission for Clean Ganga (NMCG) to rejuvenate the Ganga