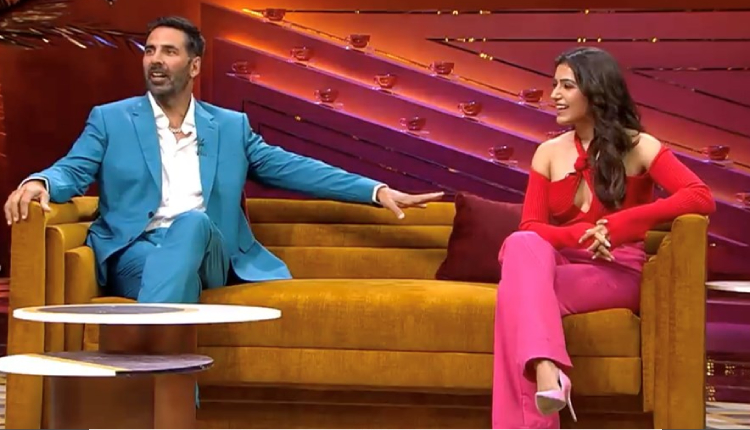 Actor Ranveer Singh and Alia Bhatt opened the Koffee With Karan Season 7, and it was followed by Janhvi Kapoor and Sara Ali Khan sharing the couch on the show, and now, actor Akshay Kumar and Samantha Prabhu will feature in the third episode.

Koffee With Karan Season 7, the talk show is out with first teaser for the third episode featuring Akshay Kumar and Samantha Prabhu.

Karan Johar shared the fun teaser on his social media profile. He captioned it, “Heart of gold and a dash of sexy & bold – my two new guests on the Koffee couch are bringing the heat this Thursday in an all new episode of #HotstarSpecials #KoffeeWithKaran S7 only on Disney+ Hotstar. @disneyplushotstar @akshaykumar @samantharuthprabhuoffl @apoorva1972 @jahnviobhan @aneeshabaig @dharmaticent”

Actress Samantha made her Hindi debut with Raj and DK’s The Family Man season 2. She played the formidable villain Raji in the Amazon Prime Video series.

Next she will be seen sharing screen space with Varun Dhawan, in the Indian offshoot of the Russo Brothers’ Citadel. The project will be helmed by Raj and DK.

Akshay Kumar is one busy-bee, he will soon be seen in Raksha Bandhan, post that he has lined-up movies such as Ram Setu, Mission Cinderella, OMG 2 – Oh My God! 2, Selfiee, Untitled Soorarai Pottru remake, Capsule Gill and more for release.

Manushi Chhillar Kick-Starts The Shoot Of Tehran With John Abraham