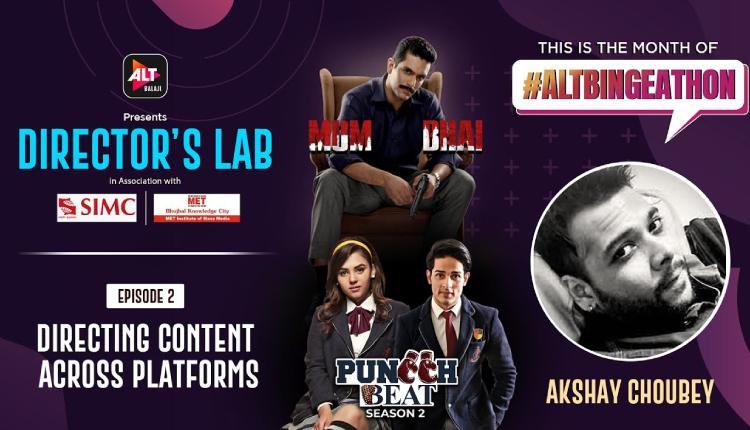 Initiated as part of the #ALTBingeathon campaign, ‘The Director’s Lab’ is a masterclass for aspiring storytellers, by streaming giant ALTBalaji in association with the students of Symbiosis Institute of Media and Communications and MET Institute of Mass Media. Recently, ALTBalaji launched a new video from the series where students interacted with Mum Bhai and Puncch Beat 2’s director Akshay Choubey. The students who aspire to become storytellers and content curators got an opportunity to learn from his journey, experiences, and learnings. Akshay, who has directed 7 shows, produced a feature film ‘Laugh’ and has worked with the likes of Dibakar Banerjee, Anubhav Sinha, and many more, had so much to share with the students.

Akshay described how being an assistant director and a director is absolutely two different ball games during the conversation. Speaking about OTT being a threat to the cinema culture, Akshay agreed and said that television can be compared to Dal Chawal. In contrast, cinema was more of a celebration and compared it to Butter Chicken. He also agreed that OTT has made cinema more accessible and provides more options and individual satisfaction.

Akshay also specified that he would love to create an environment on the sets where the actors are comfortable and happy about what they deliver to the camera. He describes actors as the ‘most sensitive people on set’ and said they must be cajoled and cared for. He firmly believes that an actor should be given some authority in terms of how a scene should be shot because an actor can only shine when freedom is given to them.

Lastly, when asked if he had any advice for young filmmakers, he said, “Don’t get so obsessed with assisting. It’s good to assist, and it’ll make you a sharp and better director because you understand how a set functions when you assist, but you must know when to stop and move on. Instead, be obsessed with understanding your craft and knowing how to tell stories. Spend time writing and discovering yourself. Write to expand your mind, be obsessed with telling good stories. You’ll figure out how to tell better stories as life goes on. Create content and post it on the internet till you get a good opportunity and can maximize it. Don’t worry about monetizing it.”

ALTBalaji, as a part of their massive ongoing campaign, #ALTBingeathon, launched a YouTube series titled ‘The Director’s Lab’. ‘The Director’s Lab’ aims to bridge the gap and help aspiring students to get practical knowledge in the world of showbiz before they set foot in the very competitive industry of film-making and direction. For the same, ALTBalaji has tied up with two reputed B-schools, Symbiosis Institute of Media and Communications and MET Institute of Mass Media. It is indeed a one-of-a-lifetime opportunity for the students who aspire to make a mark in the industry.

The directors from ALTBalaji have been widely acclaimed for the various ALTBalaji shows spanning multiple genres. The students will get a one-of-a-kind opportunity to interact with the directors. Other acclaimed filmmakers who will be seen on the show are Sattwik Mohanty (Director- Dark 7 White) and Santosh Singh (Director- Fittrat and Apharan 2). The first episode featured Priyanka Ghose.