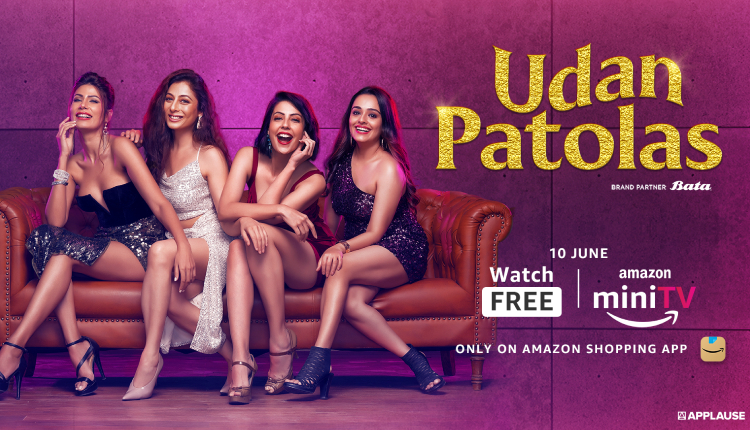 Amazon miniTV, Amazon’s free video streaming service on its shopping app, announced the launch of its upcoming exclusive web series – ‘Udan Patolas’ that will premiere on June 10. This 6-part comedy, drama, and romance series is anchored on the friendship between four women hailing from Punjab (Patolas), who are living it up in the maximum city. The story revolves around their relationships, work-life situations, and their ambitions. Produced by Applause Entertainment – the makers of the successful series ‘Scam 1992’ in association with Sol Productions and directed by Shakti Sagar Chopra, from the Hatim and Ramayan fame, the web series features a stellar young cast including actors Apoorva Arora, Aastha Sidana, Poppy Jabbal, and Sukhmani Sadana.

“Udan Patolas reflects the voice of today’s generation of Indian women who are fiercely independent, are not afraid to speak their mind and believe in living life in the moment. It is a fun, relatable story and will surely remind you about your close group of friends. We are thrilled to partner with Applause Entertainment, who are known for developing path-breaking content. Udan Patolas promises to be a fun ride and we look forward to the reaction of our viewers,” said Girish Prabhu, Head of Amazon Advertising.

“At Applause Entertainment, we love to surprise and delight our audiences. A slice of life dramedy filled with quirky characters and delightful Punjabiyat, Udan Patolas is a perfect dose of fun and entertainment for the viewers. We are excited about our maiden partnership with Amazon miniTV and with Amazon shopping app’s wide reach, viewers across India will be able to enjoy this web series for free!” said Deepak Segal, Chief Creative Officer, Applause Entertainment.

Catch all episodes of Udan Patolas as it premieres on Amazon miniTV on June 10 for free.

5 Summer Fruit Juices to Incorporate into Your Diet