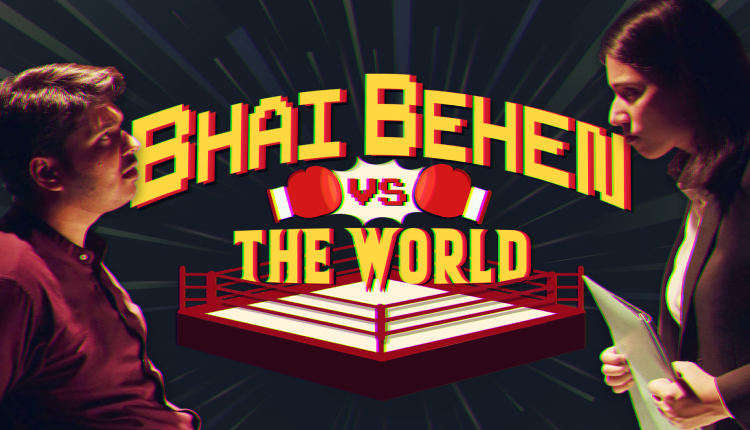 Amazon miniTV – Amazon’s free video streaming service is gearing up to premiere an extremely hilarious and relatable web series, Bhai-Behen vs The World, showcasing the relationship between a brother and his sister. The streaming service today unveiled the trailer for the quirky series that will see real-life brother-sister duo Shubham and Saloni Gaur in lead roles. Created by Team Yellow Montage, Bhai – Behen vs The World is set to stream exclusively on the service, for free, from 12th December onwards.

The trailer gives us a sneak peek into a sibling jodi where Shubham Gaur plays the elder brother who thinks he is a master of all trades, while his younger sister Saloni Gaur is the real mastermind who knows won’t back down from any battle! Watch this brother-sister duo deal with their nosy relatives, mysteries of missing objects, and a lot more on Amazon miniTV from 12th December.

Speaking on the upcoming show, Saloni Gaur said, “Our bhai-behen content has received a lot of love always. So, we decided to do something bigger and different with Bhai-Behen vs The World. Usually, it is Bhai vs Behen but here, you’ll witness the camaraderie between us and how we unite against the world.

Echoing her sentiments, Shubham Gaur shared, “It was great playing bhai-behen for the reel also. We hope the audiences like our chemistry and have a great time watching the show because we had an amazing time making it. Siblings all across ages will be able to relate to our show and we are both super excited for it!”

THE NITOPADESHA, THE CLASSIC INDIAN GUIDE TO CITIZEN-CRAFT, TRANSLATED FOR THE CONTEMPORARY READER, IS SCHEDULED TO RELEASE IN JANUARY, 2023