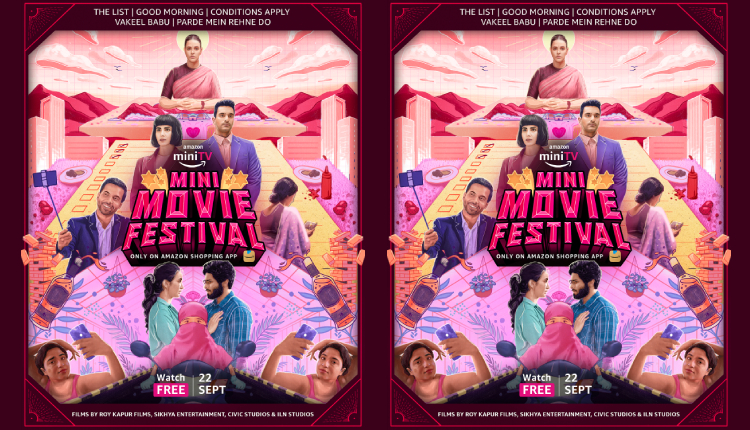 Amazon miniTV – Amazon’s free video streaming service has today announced the launch of a one-of-a-kind movie festival – Mini Movie Festival. A unique celebration of cinema, the festival will feature the simultaneous premiere of five relatable and gripping short films together on 22 September, offering a wholesome entertainment experience to all.

Setting a new benchmark in the video streaming space, this ambitious project of Amazon miniTV aims to bring together not only a diverse set of stories but also an ensemble of talented actors across a bouquet of short films. From romance to legal dramas, these slice-of-life movies are sure to touch the viewers’ hearts.

“We are delighted to launch our first edition of Mini Movie Festival in collaboration with some of the finest content creators of the industry. As we present a powerhouse of talent, renowned production houses, and skillful directors, we hope to deliver some meaningful and impactful stories through this initiative. It’s a pleasure to have so many talented people and creative minds come together and become a part of a renaissance in the content streaming space through Mini Movie Festival.” Hundreds of millions of Amazon customers from all parts of India will be able to enjoy these fantastic movies for free!” said, Girish Prabhu, Head of Amazon Advertising.

“We at Sikhya Entertainment have had a long-standing association with Amazon miniTV. The video streaming service has premiered award-winning short films in the past. Launching our two mini-movies, Conditions Apply and Good Morning, with their first-ever Mini Movie Festival, is absolutely amazing. We are thrilled to continue our partnership and it feels incredible to be a part of this journey together.” “Conditions Apply is a classic relationship drama with a twist, we explore the idea of love and the things we do to find closure after a breakup. Good Morning is a story of a multitasking super mom. We intend to inspire viewers with this tale of motherhood. “With inspiring performances from our extremely talented actors and soul-stirring storylines by our extraordinary directors, we hope that the viewers appreciate the nuance within each story and engage with our short films to take the conversation forward.” said Guneet Monga, CEO, Sikhya Entertainment.

“Written and Directed by debutante Gaurav Dave and Helmed by the fabulously talented Kirti Kulhari and Angad Bedi, The List takes an incisive look into the life of an urban Indian couple in their early 30s.” said Malvika Khatri, Roy Kapur Films. She added, “We are thrilled to bring to audiences this unique and thought-provoking mini movie as part of Amazon miniTV’s Mini Movie Festival. The streaming service is truly a home of short films and new talent and we’re glad to embark on our association with the Amazon MiniTV team!”

“Our short film, Vakeel Babu, depicts the story of a young lawyer who struggles to find his purpose. We’re glad to have Abhishek Banerjee playing the central character and bringing his conflict to life. We are thrilled to have Vakeel Babu premiere on Amazon miniTV and be part of their select showcase at the maiden Mini Movie Festival. We hope viewers enjoy watching our labour of love and vision to imagine a more empathetic legal system.” said Anushka Shah, Founder, Civic Studios.

“Parde Mein Rehne Do explores the attraction, confusion, and complexity faced by a soon-to-be divorced woman in her 30s, who meets someone she likes on a dating app”, said Angad Bhatia, Founder and CEO, ILN. He further added, “While we’re happy to portray an unusual and untouched story, our excitement has elevated further as our short-film will release on Amazon miniTV as part of their first Mini Movie Festival. We hope viewers like Parde Mein Rehne Do and shower us with love and appreciation.”

Amazon miniTV will launch the Mini Movie Festival on 22 September 2022. So, if you’re looking for free deep, relatable, and gripping content, log into Amazon miniTV for free through Amazon’s shopping app and on Fire TV. No subscription is required.