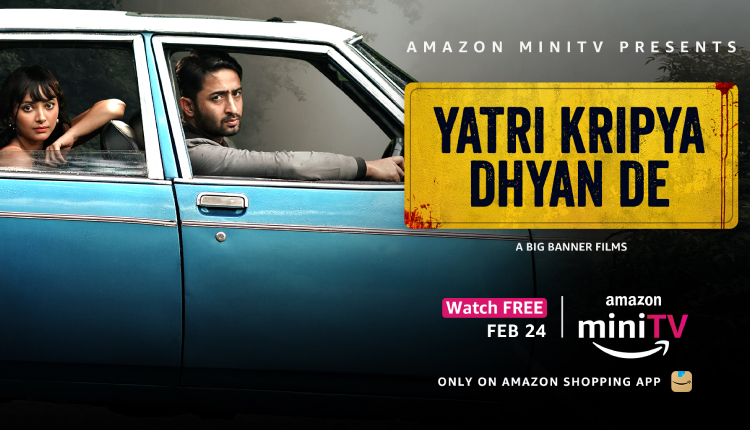 ired of watching too many romcoms this month? If yes, then you are in for an absolute treat! Amazon miniTV announces the premiere of a thriller story ‘Yatri Kripya Dhyan Dein’, which will be available for free on Amazon’s shopping app from February 24. Featuring some of the most popular actors on TV and OTT – Shaheer Sheikh and Shweta Basu Prasad, this short film is created by Big Banner Films.

‘Yatri Kripya Dhyan Dein’ is a story of Sumit (played by Shaheer Sheikh), a charming man in his 30’s, who is driving home in his new car. On his way, he meets Nandita (played by Shweta Basu Prasad), a hitchhiker. Replete with twists and turns, what unfolds is a series of nail-biting events that will surely keep you gripped!

‘Yatri Kripya Dhyan De’ is surely going to enthral audiences and keep them at the edge of their seats! We are eagerly awaiting to present this fantastic short film by Big Banner Films to our viewers, that will premiere for free on miniTV within Amazon’s shopping app,” said Girish Prabhu, Head of Amazon Advertising.

“At Big Banner Films, we aim to create stories that our audiences can relate to and find entertaining, and Yatri Kripya Dhyan Dein does just that. It is encouraging to see that our creative vision has been brought to life through this title, which is helmed by the highly talented writer-director – Abhinav Singh. We are delighted that this short film will premiere for nationwide audiences for free on Amazon miniTV on Amazon’s shopping app”, said Shaneem Zayed, Producer, Big Banner Films.