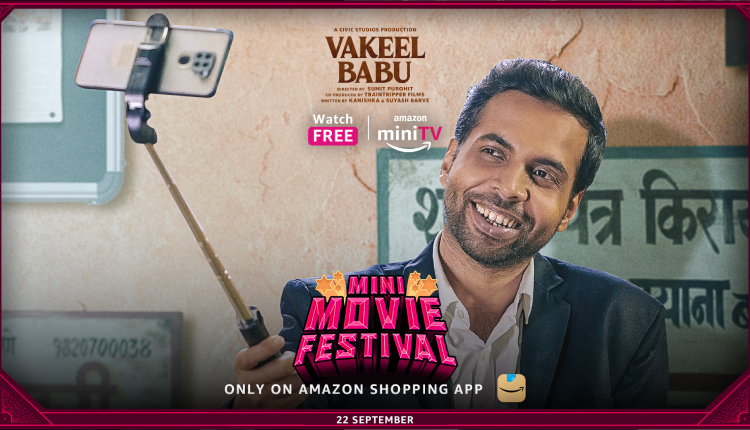 Amazon miniTV – Amazon’s free video streaming service, has given a modern twist to legal dramas with its upcoming mini movie, Vakeel Babu. This short film is slated to release on September 22nd as part of the unique film extravaganza Mini Movie Festival. Headlined by the multi-faceted Abhishek Banerjee and directed by Sumit Purohit, this movie is one that promises to pack a punch.

The trailer that was released by Amazon miniTV today introduces viewers to the life of Shiraz Hassan, popularly called ‘Vakeel Babu’ by his acquaintances. While he fights for justice in the court, he chases success through his digital channel with a dream to create viral content. However, matters get serious when he is approached by an anonymous female victim who was abused by an influential person.

“Vakeel Babu will show you that sometimes life is not simply black or white. I hope my audience will love this avatar of mine as much as they’ve loved the others. It is always a pleasure to be associated with Amazon miniTV for it’s a one of its kind extravaganza ‘Mini Movie Festival’. The amazing lineup of short films that this movie festival will showcase has the potential of redefining the kind of content we are used to consuming, and that in itself is a major feat.” said, Abhishek Banerjee.

Created by Civic Studios and written by Kanishka Deo and Suyash Barve, Vakeel Babu will premiere on September 22 on Amazon miniTV for free within the Amazon Shopping App and on Fire TV.

If The Lord of the Rings: The Rings of Power was made in India; these Indian Film Actors would make for the perfect cast