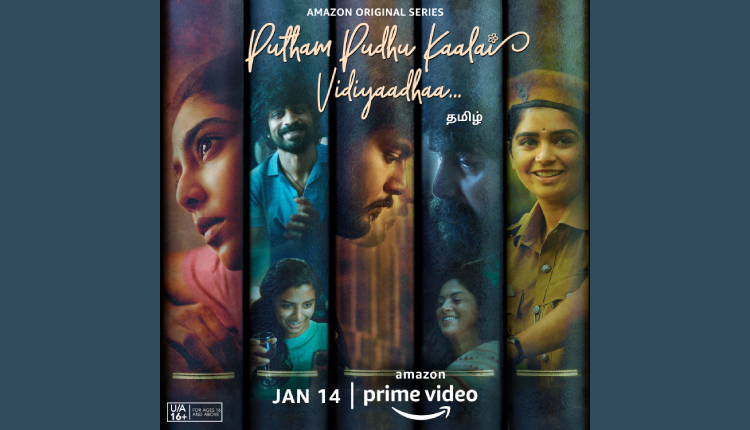 Celebrating the spirit of heartwarming and buoyant stories of Putham Pudhu Kaalai Vidiyaadhaa… Amazon Prime Video today launched the music of the much-awaited Tamil anthology. Following the success of Putham Pudhu Kaalai, music continues to be a defining factor in the second edition, illustrating tales of hope, resilience and human spirit amid the second Covid-19 lockdown. Bringing together renowned and upcoming artists like GV Prakash Kumar, Sean Rolden, Kaber Vasuki, Pradeep Kumar, Goutham Vasu Venkatesan and Karthikeya Murthy, the music album beautifully brings out the essence of each story of the Amazon Original series.

Known for creating some of the best soundtracks in Tamil Cinema, GV Prakash Kumar continues his successful association with the Amazon Original, becoming a common factor between both editions of the Tamil anthology. The multi-talented artist had previously created the title song for Putham Pudhu Kaalai, and now he has sung and composed the theme title track for Putham Pudhu Kaalai Vidiyaadhaa…. The song is written by Kaber Vasuki and also sung by Yaamini Ghantasala.

Speaking about his association with the anthology and the theme track, GV Prakash Kumar said, “We are all stories and there is nothing better than some music to weave magic into the same. It has been a delight working on both versions of this anthology that taps into myriad human emotions, stuck at the crossroad of adversity. The stories in this second edition brings with it more intense emotions and to create its title track, embodying the spirit of hope and resilience, pushed me to dig deeper to bring out the the right notes in the melody. I hope the audiences like ‘Putham Pudhu Kaalai Vidiyaadhaa’ track as much as I enjoyed creating it. I am positive the music and the stories of Amazon Original series upon release will bring the much-needed positivity in current times.”

Sean Roldan, singer and composer of ‘Kitta Varudhu’ for Mugakavasa Muttham said, “As a film, Mugakavasa Muttham will surely tug at your heart strings and make even the coldest of hearts melt. We’ve seen how the pandemic has physically distanced most of us from our loved ones. Keeping in mind the theme of hope, we created ‘Kitta Varudhu’ to reiterate that the pandemic hasn’t ended yet and we need to take our precautions for a better tomorrow. I hope that this catchy tune, with lyrics by Balaji Mohan, has the power to convey the message. I am excited for audiences across the globe to listen to ‘Kitta Varudhu’ and watch Putham Pudhu Kaalai Vidiyaadhaa… on Prime Video.”

Goutham Vasu Venkatesan, singer and composer of ‘Thanimai Ennum’ for Loners said, “Giving music to this film was a very special experience because it had to be aligned with the very current and unique theme the story is based on. Two individuals meeting at a virtual wedding was unheard of two years ago. To replicate this one-of-a-kind scenario through music and adding elements of togetherness was very gratifying. I am looking forward to everyone watching Loners in Putham Pudhu Kaalai Vidiyaadhaa… and am thankful to Prime Video for taking our music across 240 countries and territories.”

Karthikeya Murthy singer and composer of ‘Whistler’ in Mouname Paarvayaai said, “So close yet so far is the perfect way to describe the story of Mouname Paarvayaai. The film taps into a narrative that most couiples experience at some point in their relationship and highlights emotions that are simple yet unsaid. I tried to precisely convey this through my track ‘Whistler’ and I hope the audiences like it. Looking forward to the release of Putham Pudhu Kaalai Vidiyaadhaa…on Prime Video and the audience reactions to pour in for the track and the anthology as a whole.”

Pradeep Kumar, singer and composer of ‘Nizhal’ for Nizhal Tharum Idham said, “Nizhal Tharum Idham is a beautiful story of loss and longing involving a daughter and her estranged father. Through my track ‘Nizhal’, the intent is for the audience to feel the girl’s emotional state of mind and relate to her internal conflicts as she treads through the most difficult week of her life. I am excited for everyone to listen to the track and watch Putham Pudhu Kaalai Vidiyaadhaa…on Prime Video”

Kaber Vasuki, singer, composer and writer of ‘Mugamoodi’ in The Mask said, “Self-acceptance doesn’t come easy. And once it does, we crave the acceptance of our loved ones, especially our parents. In The Mask, the protagonist’s relationship with his parents, his friends and himself are relatable and deep. The song’s lyrics reflects his life’s moments that lead up to his self-acceptance. The liberating energy that he feels is set to reflect in the musical composition. I am eager to see how the audiences react to the music and the anthology when it premieres on Amazon Prime Video.”

Each story in Putham Pudhu Kaalai Vidiyaadhaa… is standalone and yet they are all bound together by the theme of personal discovery of hope and new beginnings through human connection. These are stories of optimism, love and second chances, set in the second Covid-19 lockdown. The stories feature Aishwarya Lekshmi, Arjun Das, Dhilip Subbarayan, Gouri G Kishan, Joju George, Lijomol Jose, Nadiya Moidu, Nirmal Pillai, Sananth, and TeeJay Arunasalam, and are directed by Balaji Mohan, Halitha Shameem, Madhumita, Richard Anthony and Surya Krishna.

Designer Payal Pratap collection, ‘View with a room’ at The Amethyst Room, Chamiers