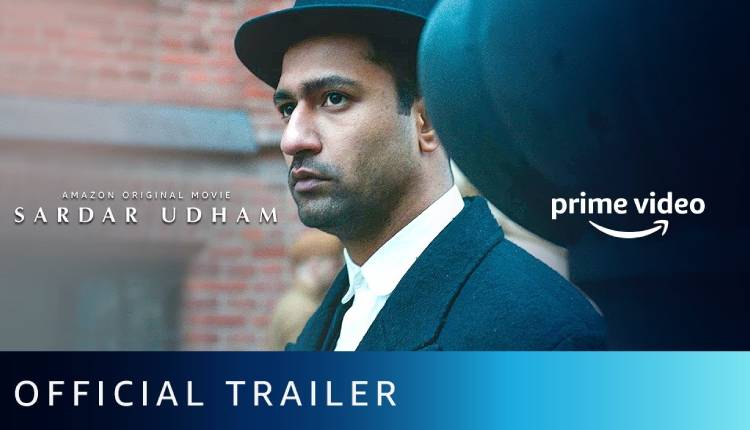 In a special tribute to one of the greatest martyrs in Indian history, Sardar Udham Singh, Amazon Prime Video today launched the trailer of the much-awaited Amazon Original Movie Sardar Udham at a press conference in Mumbai. Produced by Ronnie Lahiri and Sheel Kumar, and directed by Shoojit Sircar, this much-awaited film is the story of Sardar Udham Singh, essayed by Vicky Kaushal. The movie also stars Shaun Scott, Stephen Hogan, Banita Sandhu and Kirsty Averton in pivotal roles and Amol Parashar in a special appearance. Prime members in India and across 240 countries and territories worldwide can watch Sardar Udham this Dussehra starting 16th October.

They fired 1,650 rounds of bullets. He only fired 6, but the impact of those 6 has got etched deeply into the hearts of freedom fighters and the generations that followed. The trailer gives a glimpse into the life of Sardar Udham Singh, played by Vicky Kaushal in a never-seen-before avatar. This story showcases undying bravery, fortitude, and fearlessness of an unsung hero, from the deeply buried annals of our history. The film focuses on the undeterred mission of Sardar Udham Singh to avenge the lives of his beloved brethren, who were ruthlessly murdered in the Jallianwala Bagh Massacre of 1919.

“The story of Sardar Udham Singh is one that enthralled and inspired me. It represents the strength, pain, passion, extraordinary courage and sacrifice, and many such values that I have tried to do justice through my character in the film. The role called for a lot of physical, and even more mental preparation to get into Udham Singh’s shoes and bring to life the story of a man whose heroism and grit stand unmatched,” said lead actor Vicky Kaushal who essays the role of Sardar Udham. “I look forward to sharing an intriguing page from the history of India’s freedom struggle through this film. This is one story that needs to be shared not only in India but also across the world and I am happy that, with Amazon Prime Video, Sardar Udham will cut through geographies and take a piece of our history across the world.”

“Sardar Udham to me is not just a film, it is a dream come true. It took years of in-depth research to unearth and share with the world the valiant story of a martyr who sacrificed his life to avenge India’s most dreadful tragedy,” said Shoojit Sircar, about his experience of directing Sardar Udham. “The true essence of Udham Singh’s patriotism and bravery lives in the hearts of each and every person in Punjab even today. My aim was to make a film that familiarizes the viewers with Udham Singh’s valour and inspires them. This film is my ode to his lionhearted spirit, his fearlessness and sacrifice in the fight for the country’s independence. The entire team is extremely proud to have had an opportunity to work on bringing forward a story of a revolutionary who played a key role in India’s freedom struggle.”

The film, Sardar Udham, is a story of Sardar Udham Singh, a gallant and patriotic man who fought selflessly and courageously against the British subjugation of India. The film focuses on the undeterred mission of Sardar Udham to avenge the lives of his beloved brethren who were brutally killed in the Jallianwala Bagh Massacre of 1919.