Break Out of the Monotony with History TV18’s Latest Series – History’s Greatest Escapes with Morgan Freeman, which Showcases some of the Most Daring Jailbreaks 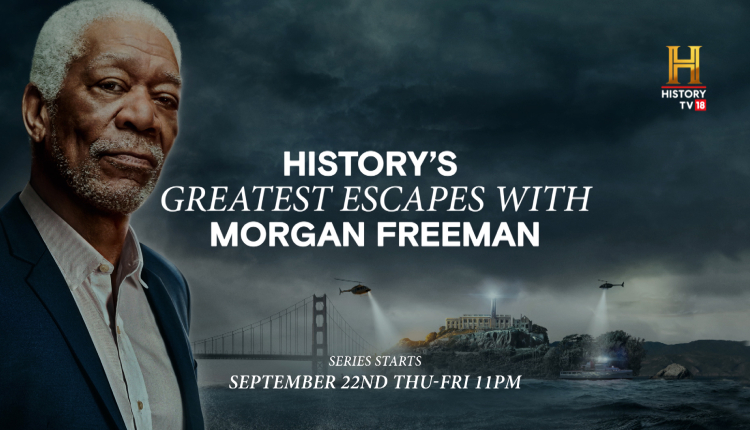 Famous jailbreaks are the stuff of legends; the truth about them is often shrouded in mystery and intrigue. Now, with dramatic recreations, dynamic storytelling and cutting-edge visual effects, renowned escapes from the world’s most heavily guarded prisons will come to life in graphic detail in the new non-fiction series History’s Greatest Escapes with Morgan Freeman, premiering 22nd September, 11.05 PM on History TV18.

Hosted and executive produced by Academy Award® winner Morgan Freeman, each episode of this eight-part series will focus on a prominent prison getaway. Freeman, recognized for his distinctive and deep voice, makes the perfect narrator for this series. One of his most recognized and beloved performances was in The Shawshank Redemption, a film focusing on the experiences of a group of inmates inside the Shawshank State Penitentiary, and the eventual escape of one of its protagonists. The movie released exactly 28 years ago, and has been the #1 film since 2008 on IMDB’s user-generated Top 250 Movies.

In this show, History TV18 and Freeman will explore true stories that captured the attention of the public and the authorities. Audiences will get an up close view of what the prisoners faced in executing their break outs. With maximum security and minimal resources available, unearth every step of the inmates’ meticulous plans and the intense manhunt that immediately followed. From scaling walls and rooftops, to getting down and dirty, plotting an underground getaway, do these jailbirds stand a chance at freedom? Will their plans see them dig their own graves, or an escape route to the outside world where they can finally break free from their cages?

Extraordinary escapes spanning time and place are recreated by actors and using new software, with interviews from some of the prisoners themselves, their families, cell mates and the guards that tried to prevent the escapes. The eight episodes documented in History TV18’s latest series include: Alcatraz, North Country Breakout, El Chapo, Belfast Breakout, Conquering the Wall, Fleeing Hellmira, Escaping Hitler and Assassin’s Flight.