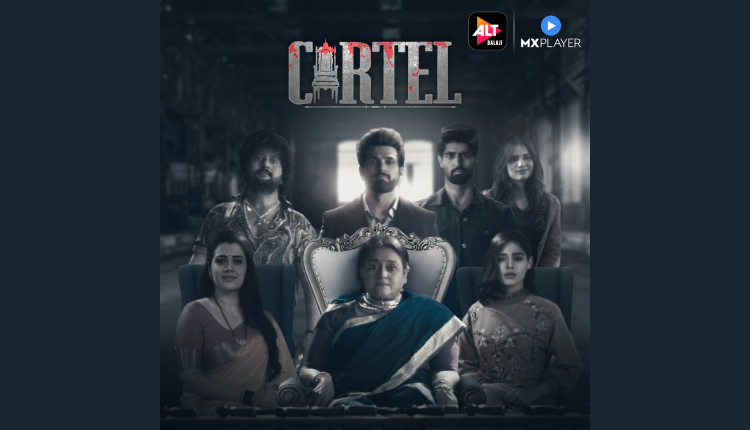 India’s homegrown OTT giant ALTBalaji and India’s entertainment super app MX Player have been entertaining the audiences with many entertaining binge-watch shows. The magnanimous platforms just dropped 14 episodes of their latest thriller entertainer CARTEL. After building intrigue around the town about #WhoaretheAngres?, the streaming platforms kept the viewers on the edge of their seats while the internet went berserk over who Angres were. Mirroring the audience’s fascination with gangsters and their turf wars, MX Player and ALTBalaji’s most anticipated thriller entertainment Cartel is out there for everyone to watch. Viewers can finally watch Cartel on ALTBalaji and MX GOLD (MX Player’s subscription VoD service).

Cartel is the story of the first family of the business, who define power and rule Mumbai, and is led by Rani Maai (played by Supriya Pathak). The fate of this family’s rule lies upon the shoulders of her three sons – Major Bhau (Tanuj Virwani), Abhay (Rithvik Dhanjani), and Madhu (Jitendra Joshi). Set in present-day Mumbai, Cartel takes us through the journey of 5 crime lords and how their world, the underworld, is connected to every corner of the city’s political, judiciary, and corporate bodies.

The story begins with all five gangs coexisting peacefully, without causing each other any trouble, thanks to a treaty put forth by Rani Maai, played by veteran actor Supriya Pathak. However, as the story unfolds, everyone realizes that the peace and silence were only the calm before the storm. An unexpected series of events causes various problems that only create a loop for greater ones. The story ahead is filled with twists and turns, taking the viewers through a rollercoaster of emotions through manipulative, exhilarating, dramatic, and action-packed events.

Supriya Pathak who plays Rani Maai says, “Rani Maai is a woman who has been fighting the man’s world. She is one of the very interesting characters in the show. We had a lovely team working with us. And my actors and co-actors were a lovely lot of young actors, so, the energy is quite pumped up.”

Rithvik Dhanjani, who plays Abhay Angre, said, “We have worked extremely hard on this show, and it has cost us our blood, sweat, and tears. When I say that this is something the audience does not expect from me, I mean it. I cannot wait to see the viewer’s reactions to the show and find out what they think about it. From costumes to dialogues, script, and production, we have left no stone unturned, and I’m very confident that the show will do well.”

On the other hand, Tanuj Virwani, who plays Major Bhau, excitedly quipped, “This is one of the most exciting shows with such a diverse cast, such a large scale, and such an intriguing story. We have all worked extremely hard to make Cartel an experience worth the while for the viewers. It has been a unique and challenging journey filled with many enjoyable experiences that we could all learn from. I hope the viewers enjoy the final product and that we can surpass their expectations.”

The fans will finally watch The Angre Family in action and understand why they rule Mumbai. The show revolves around the challenges and obstacles faced by The Angre Family, after the attack that changes their house’s fate. With powerful dialogues like, “Goli kahi se bhi chale, marta toh koi apna hi hai”, “Harna buzdili nahi, har maan lena buzdili hai”, Cartel will soon set a new genre for itself. The show is a perfect blend of humour, action, suspense, and drama with twists, turns, deceit, manipulation, action, and a lot of drama, making this show an interesting watch for the viewers.

The show is currently streaming on ALTBalaji and MX GOLD (MX Player’s subscription VoD service). So don’t forget to binge-watch all the 14 episodes on the streaming platforms!