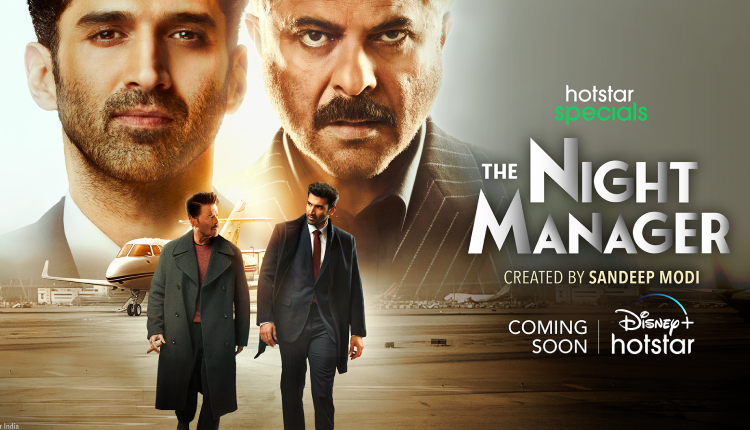 Kicking off the New Year with power and scale, Disney+ Hotstar announces one of its biggest shows for 2023 ‘The Night Manager’. A high-octane thriller wrapped in lavish drama and picturesque sights, the Hotstar Specials’ series brings together a power-pair – Anil Kapoor and Aditya Roy Kapur in never seen before characters along with Sobhita Dhulipala, Tillotama Shome, Saswata Chatterjee, Ravi Behl among others. It’s gripping, it’s layered, it’s complex…it’s everything one can expect in a thrilling package. Created and Directed by Sandeep Modi and co-directed by Priyanka Ghosh, the series is produced by The Ink Factory and Banijay Asia and will release soon on Disney+ Hotstar.

Gaurav Banerjee, Head – Content, Disney+Hotstar & HSM Entertainment Network, Disney Star said, “The Night Manager in our ambition is the best of high stakes drama! Great actors, stunning locales and a rich plot with juicy twists. We hope viewers have as much fun watching it as all of us have had while making it”.

Director Sandeep Modi, said, “This is my second association with Disney+ Hotstar and we’ve tried to raise the bar with this show, be it the storytelling, scale or technical finesse. It’s always exhilarating and exasperating in equal measures to helm such a big show and I am super excited to present this tale of espionage, revenge and betrayal to the world”

Actor Anil Kapoor said, “I have always loved working on differentiated content and characters. The first time I read the script, I just fell in love with the character of Shelly Rungta. Shelly is a powerful man, a philanthropist and a perfect balance of wit and evil with imperceptible menace just like the story of the show – a perfect blend of entertainment and great storytelling. I thoroughly enjoyed working with some of the finest from the industry and one of the leading OTT platforms – Disney+ Hotstar and eagerly waiting to see audience’s reaction to the show”.

Actor Aditya Roy Kapur, said, “I have always wanted to perform a multi-layered character in a series with a complex narrative arc, and when the platform approached me to play the title role in The Night Manager, I knew this was just the one I’d been looking for! My character Shaan is the kind of person who can effortlessly make people believe whatever he wants them to, and that perfectly mirrors what we as actors strive to achieve with our craft. I’m glad that the Disney+ Hotstar team and Sandeep Modi gave me this opportunity to play such an exciting character and I can’t wait to bring him to audiences in India and around the world!”

Tessa Inkelaar, Leader of The Ink Factory’s Asia slate, said ‘We are thrilled to see Anil Kapoor and Aditya

Roy Kapur play the lead roles in this wonderful story, under the remarkable direction of Sandeep Modi.It’s a hugely fresh and exciting story and we hope that Indian audiences will be as excited about it as weare. We are profoundly grateful to Disney+ Hotstar for giving us the chance to tell this story on a freshcanvas, working with our partners in Banijay Asia. We hope that this will be the first of many Ink Factoryprojects in India and we cannot wait to see it launched.’

Deepak Dhar, Founder & CEO, Banijay Asia, said “It is always a pleasure partnering with Disney+ Hotstar, and we’re excited to be kicking off the New Year with The Night Manager. The show carries with itself the grand legacy of the original British adaptation of the novel, with The Ink Factory, which has been widely loved and acclaimed. The show brings together some of the best names in the industry, from Anil Kapoor, Aditya Roy Kapur, Sandeep Modi, to name a few. It amalgamates thrill, drama and entertainment, with an Indian heartbeat. Our aim is to continually introduce concepts and shows that have the potential to be reimagined with local sensibilities and we are looking forward to share this with the audiences.”

~ Stay tuned for the much-awaited spy thriller, only on Disney+ Hotstar ~

Get a Taste of European Pie at Glazed