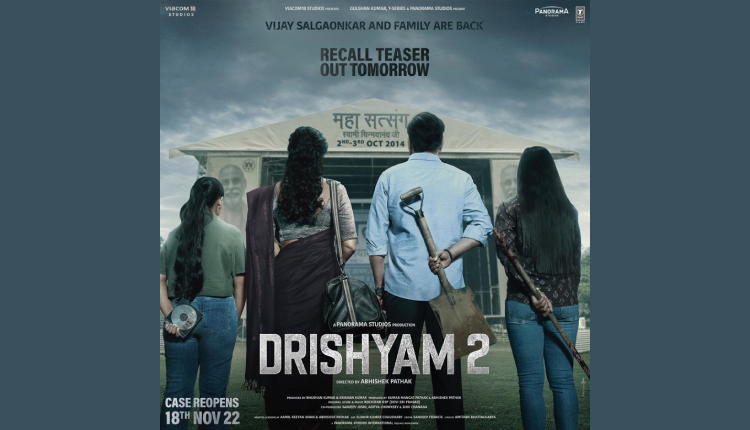 Superstar Ajay Devgn, Tabu and Shriya Saran starrer Drishyam 2, first look poster and teaser release deeds are out. The sequel to hit Drishyam will a continuation of prequel.

On the poster, Ajay Devgn as Vijay Salgaonkar, Shriya Saran as Nandini Salgaonkar, Ishita Dutta as Anju Salgaonkar, and Mrunal Jadhav as Anu Salgaonkar, are seen standing in-front of Satsang podium, and Vijay is seen holding the shovel.

Helmed by Abhihek Pathak, crime thriller also stars Akshaye Khanna and Rajat Kapoor. It is a remake of the 2021 Malayalam film of the same name and also the sequel to Drishyam (2015).

Primarily filmed in Goa with other locations including Mumbai and Hyderabad, it is scheduled for theatrical release on 18 November 2022.

Apart from Drishyam 2, Ajay Devgn has a slew of projects lined up for release, including Thank God, Maidaan and his own directorial Bholaa, which also features Tabu in a pivotal role. Ajay was last seen in the film Runway 34 alongside Amitabh Bachchan and Rakul Preet Singh; he had also helmed the movie.