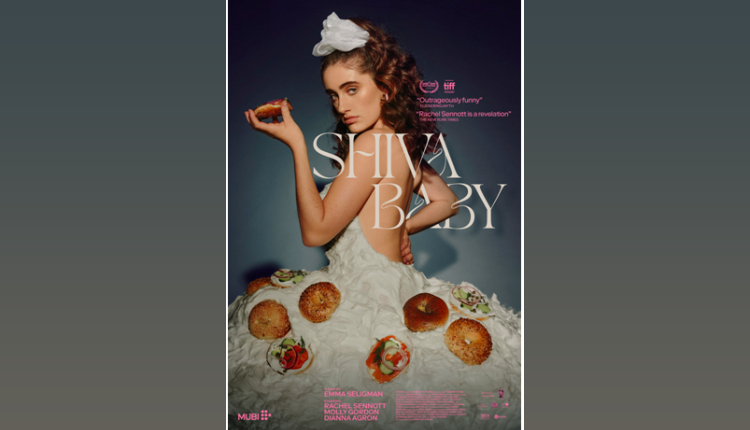 MUBI, the global distributor and curated film streaming service, are excited to release the new trailer and poster for the hotly anticipated debut from Emma Seligman, Shiva Baby, available exclusively on MUBI from 11 June 2021.

A darkly playful comedy of unease about a young bisexual woman grappling with tradition and independence, Shiva Baby tells the story of Danielle (Rachel Sennott), a college student on the verge of graduating who is faced with a series of increasingly awkward and humiliating encounters at a climactic day-long shiva, a Jewish gathering of friends and family during a time of mourning.

A highlight of 2020’s Toronto International Film Festival and featuring a standout lead performance from emerging actor-comedian Rachel Sennott, the acclaimed feature debut from writer-director Emma Seligman is bold, modern filmmaking at its most daring, hilarious and unforgettable. The film also stars Molly Gordon (Booksmart), Polly Draper (Billions, The Good Wife), Fred Melamed (WandaVision, The Morning Show, A Serious Man) and Dianna Agron (Berlin, I Love You, Glee). The music is composed by the eclectic composer and multi-instrumentalist Ariel Marx (Ted Bundy: Falling for a Killer).

The Women Behind The Film

Emma Seligman is a filmmaker from Toronto and based in New York. At NYU’s Undergraduate Film & TV program, she wrote and directed Shiva Baby, the short film, upon which the feature is based. It premiered at SXSW in 2018, went on to Woodstock Film Festival, TIFF Next Wave Film Festival, Palm Springs ShortFest and is now a Vimeo Staff Pick.

Rachel Sennott is the star of the indie darling SHIVA BABY (SXSW), inspired by the critically acclaimed short film, as well as TAHARA (Slamdance), directed by Sundance Ignite fellow Olivia Peace. In addition to acting, Rachel is a comedian and writer with a unique satirical take on aspects of millennial life. Named one of the “Top Comics to Watch” of 2019 by Time Out NY, Sennott has written and starred in her own original shorts including the digital Comedy Central series “Ayo and Rachel Are Single.” Currently Sennott is co-starring opposite Kyra Sedgwick in the ABC Comedy Series “Call Your Mother.”

Tom Hiddleston A.K.A Loki fanboys over SRK and Talks about His Connection with Chennai