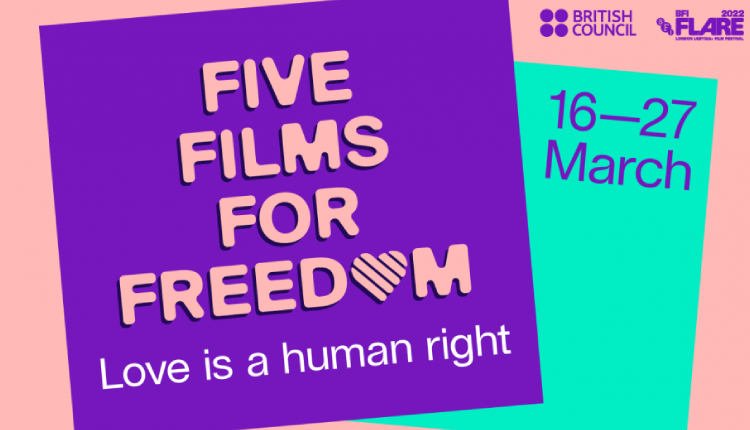 Between 16 and 27 March 2022, a collection of compelling and thought-provoking stories from countries such as India, China, UK, Croatia, and Panama will be presented. Through these films, the audience will get to know more about the emerging LGBTQI+ cinema across the world and understand the life and challenges faced by the community with themes including immigration, intimacy, and isolation.

In India, British Council has partnered with The Queer Muslim Project, South Asia’s largest virtual network of Queer, Muslim and allied individuals, to celebrate and amplify the films. In addition to the films being shown online, the films will be screened across various cities such as Delhi, Chennai, Mumbai, Ahmedabad, Kharagpur, Kolkata and Guwahati. The offline screenings are being co-hosted with some of the largest LGBTQIA+ student-led groups across three premier Indian universities. The curation also includes a series of reels and Instagram Live with popular Queer creators and youth media platforms, Yuvaa, We the Young India and Gaysi Family, roundtable discussions featuring renowned filmmakers, and open mics!

Over 17 million people from more than 200 countries have viewed the Five Films For Freedom programme since its launch in 2015. This continues to include online engagement in countries where homosexuality can be prosecuted and, in some cases, punishable by death. The campaign further addresses the language barrier typically associated with international content, by providing subtitles in local languages such as Hindi.

Mumbai filmmaker Arun Fulara’s debut short film Sunday is part of this year’s #FiveFilmsForFreedom selection. The film, which has already travelled widely to more than 50 world festivals, examines the desire and loneliness of a middle-aged man on his weekly visit to the barbers.

Speaking about Sunday, and the #FiveFilmsForFreedom campaign, Arun Fulara said: Sunday is a deeply personal film that came out of my own experience of loneliness and lack of intimacy in the urban sprawl that is Mumbai. To see that film transcend borders and touch so many people across the world is a testimony to how similar we all are, whatever culture and nationality we may belong to. The film started its journey just as the pandemic began and has, therefore, I feel, touched a raw nerve in these times of forced isolation and distancing. Being a part of the Five Films for Freedom campaign is a huge honour and deeply gratifying for our small team. While I am extremely glad that people across the world will now be able to see our film, I hope there comes a time when stories like this cease to be a reality.”

British-Nigerian Director Joy Gharoro-Akpojotor’s short film For Love, which focuses on illegal immigrant Nkechi and the unique challenges she faces due to her sexual identity
Croatian comic artist and animation director Marko Dješka’s animated film All Those Sensations In My Belly, which follows the story of trans girl Matia’s transition and her quest for love.
Panamanian Director Judith Corro first film as scriptwriter and director, Birthday Boy (Vuelta al Sol), a story about parents denying their son’s identity as a young trans man, and
Chinese Director Hao Zhou delivers Frozen Out, an experimental short film that combines scenes from rural Iowa and rural China to explore anxiety, dislocation and self-exile.

Jonathan Kennedy, Director Arts India, British Council, said “Throughout the world, #FiveFilmsForFreedom present diverse and unique stories from some cutting edge LGBTIQ+ filmmakers. With our partners in India and the UK, we aim to achieve greater empathy for and solidarity with the LGBTIQ+ community with thought-provoking short dramas on film. Arun Fulara’s beautifully subtle and sensitive film about a middle-aged man’s weekly Sunday trip to the barbers brings a richness to #FiveFilmsForFreedom from an Indian LGBTIQ+ perspective for an international audience. We are delighted to partner with The Queer Muslim Project and others in India to share a festival of screenings, discussions and new artworks inspired by this year’s films – in the certain knowledge that love is a human right.”

Rafiul Alom Raman, Founder and Director, The Queer Muslim Project said: “We are truly honoured to be collaborating with the British Council to create a space that celebrates love and freedom. The #FiveFilmsForFreedom campaign has been a catalyst in promoting nuanced and intersectional representations of LGBTQIA+ stories and people from diverse cultures around the world. As a platform that uses storytelling for social change, The Queer Muslim Project recognizes and honours the power of short films to capture the subtleties of Queer experiences – the deeply personal moments and inflection points of LGBTQIA+ lives that are invisible in mainstream narratives. This year’s curation of FFFF in India includes powerful reels by young Queer creators, open mics bringing together performance and poetry, offline community screenings, and discussions with renowned filmmakers – all centred around the themes of the five films.”

British Council’s Director of Film, Briony Hanson, said: “This year’s films represent a selection of exciting voices from across the world, telling stories about the queer experience that is still rarely seen in many places. As LGBTQIA+ people across the world continue to fight for basic rights, #FiveFilmsForFreedom is as important as ever, driving home the message that love is a human right, no matter how we identify or where we are. We can’t wait for a global audience to enjoy them.”

Michael Blyth, BFI Flare’s Senior Programmer said: “#FiveFilmsForFreedom is an essential moment in the global queer film calendar, uniting people across the World by giving free access to an incredible selection of shorts films. Not everyone has the same level of access to LGBTQIA+ film and images as we do in the UK, and this opportunity to bring queer work to millions of people remains as vital and meaningful as ever. “

The films will be available to view from 16- 27 March 2022. To watch and for details on the India programme and events visit https://www.britishcouncil.in/events/five-films-for-freedom-2022