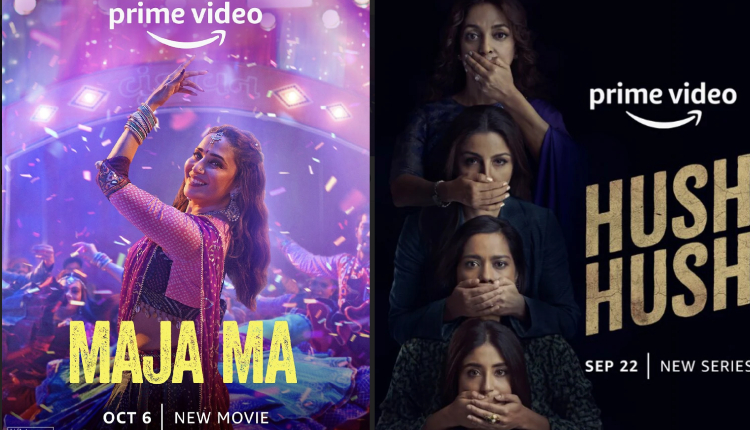 Festivals are right around the corner and we all are excited to spend this time chilling in our homes with our friends and family. Halfway into the festive season, staying at home would involve binge-watching multiple movies and shows on streaming platforms. Well, figuring out what to watch is a Herculean task and we know it. Worry not, watcher! We’ve lined up a few power-packed titles across multiple genres and languages exclusively on Prime Video, just for you! We’re sure this interesting array of titles will keep you guessing what to play first. So, here’s a list of six titles that you cannot afford to miss.

Maja Ma
Maja Ma is a fun, family entertainer which will immerse you into the world of music, colors, love, and fun with the Patel family. The movie showcases a traditional festival and a big, fat, Indian wedding. While this movie is light-hearted, it manages to get you thinking as the story twists and turns throughout the runtime. The movie features Madhuri Dixit in the lead, in a never-seen-before role along with Gajraj Rao, Ritwik Bhowmik, Barkha Singh, and Srishti Shrivastava. Directed by Anand Tiwari, Maja Ma is all set to release on October 6.

Ammu is the first Amazon Original Telugu movie co-written and directed by Charukesh Sekar and is produced by Stone Bench Pvt. Ltd. The movie is a harrowing story about Ammu, who is attempting to get her abusive husband suspended from police duty. The movie features quite the talented ensemble cast consisting of Aishwarya Lekshmi, Naveen Chandra, and Bobby Simha in the lead roles. So if you’re a person who’s all up for having chills down your spine with an absolute mind-blowing mystery and thriller movie, then Ammu is the movie for you.

Produced by Abundantia Entertainment, Hush Hush is the first all-women thriller series with a cast and crew led by women. The seven-episode thriller stars Juhi Chawla and Ayesha Jhulka, who mark their streaming debuts and Soha Ali Khan Pataudi, Kritika Kamra, Shahana Goswami, and Karishma Tanna in the lead. Hush Hush revolves around a group of women whose picture-perfect lives begin to come undone when an unexpected event brings secrets from their past and threatens everything dear to them. So, brace for impact on the releasing date, as Hush Hush will be coming to your screens on September 22.

Paving its way to the top and making some loyal fans over the years, The Emmy–nominated series, Four More Shots Please! is coming back with its third season. The highly anticipated series will take forward the story of the 4 women which will be filled with much more amusement, thrills, and unexpected turns. Apart from the lead actresses, Sayani Gupta, Bani J, Kirti Kulhari and Maanvi Gagroo, the show will have many more popular faces this time. So, get ready for this season to get you as high as four shots, for the third time.

The Lord Of The Rings: The Rings Of Power

If you’re planning to travel to Middle-earth, The Lord Of The Rings: The Rings Of Power is one hell of a roller coaster ride to get there. Loved by LOTR fans all around the world, this show highlights the epic expanse of Middle-earth in its Second Age. It also reveals how J.R.R. Tolkien’s legendary and beloved characters come together against all odds to guard against the re-emergence of evil. Led by showrunners and executive producers J.D. Payne and Patrick McKay, the series is now streaming with 4 episodes and will have weekly releases in English, Hindi, Tamil, Telugu, Malayalam, and Kannada and will conclude on October 14.

The Peripheral is based on New York Times best-selling author William Gibson’s book of the same name and is an upcoming sci-fi drama series. The show focuses on a woman trying to hold the pieces of her broken family together in a forgotten corner of tomorrow’s America. She has no future; until the future comes calling for her. Produced by Amazon Studios and Warner Bros Television, in association with Kilter Films, the series will help you travel through time into the future from October 21 onwards.

So, brace yourself! A lot of amazing content is coming for your viewing pleasure, exclusively on Prime Video!