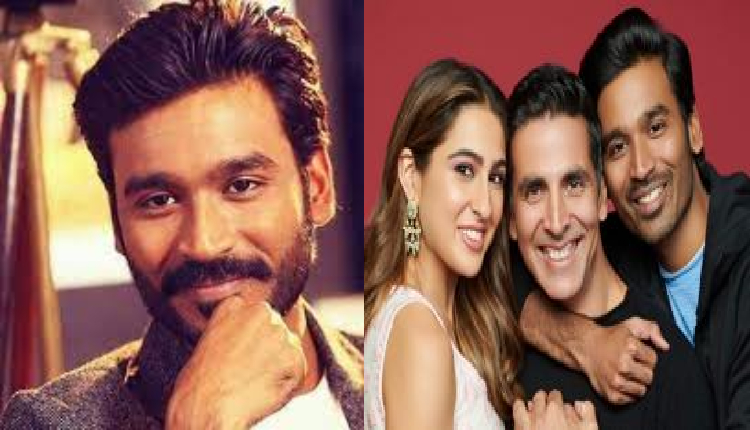 Share
As south superstar, Dhanush clocks his 38th Birthday Today, his co-actors from Atrangi Re, Akshay Kumar and Sara Ali Khan shares some heart-warming wishes for him.
Akshay Kumar and Sara Ali Khan will be seen sharing screen space with Dhanush in Atrangi Re, a musical drama helmed by Aanand L. Rai.
Sharing a working still from the forthcoming movie, Akshay Kumar extended Birthday wishes to Dhanush. He tweeted, “Your name is Dhanush, but even if it was Teer, it would have been apt…You are so on-point with your talent. Happy Birthday, buddy. Keep shining. @dhanushkraja”
Diva Sara Ali Khan also shared a still from the film and wrote, “Happiest Birthday @dhanuhkraja…Wishing you all the love, luck, positivity, peace, snickers, paneer soda, books and Carnatic music”
Atrangi Re is a romantic drama featuring Sara Ali Khan in a double role, in two different time-lines, the music of the film is composed by A R Rahman.
The project is bankrolled by T-Series, Colour Yellow Productions and Cape of Good Films. It was originally scheduled for worldwide release on 14 February 2021 in theatres, coinciding with Valentine’s Day. However, it was indefinitely pushed due to post-production delays owing to the COVID-19 pandemic in India.
The film is finally scheduled for release on 6 August 2021.
38th BirthdayAkshay KumarDhanushSara Ali Khan
Share FacebookWhatsAppLinkedinTwitterPinterestEmailFacebook MessengerTelegramViberPrint

Zaalim Coca Cola From Bhuj – The Pride Of India Is Out, Feat. Nora Fatehi