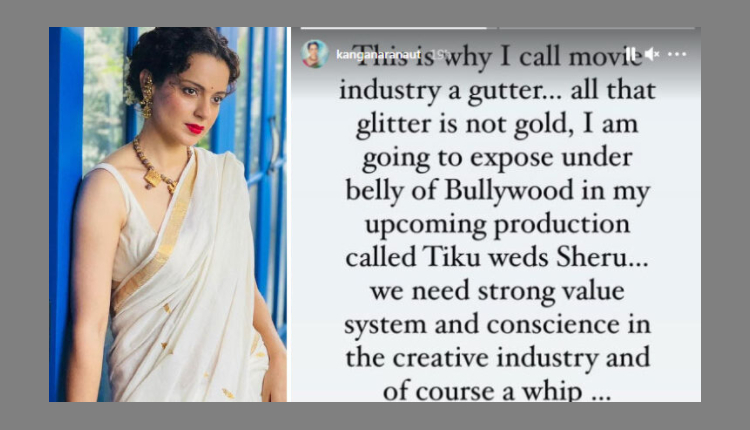 Actor Kangana Ranaut plans to expose the underbelly of Bollywood with her forthcoming debut production Tiku Weds Sheru, her statement came right after Raj Kundra was arrested in a pornographic case.

Kangana took to her Instagram stories and shared a news report regarding his arrest. It read, “This is why I call movie industry a gutter… all that glitter is not gold, I am going to expose the underbelly of Bollywood in my upcoming production called Tiku weds Sheru… we need a strong value system and conscience in the creative industry and of course a whip …”

The case was registered with Crime Branch Mumbai in February 2021 about the creation of pornographic films and the use of apps.

Meanwhile, on the work front, Kangana will be next seen in ‘Thalaivi’, which is based on Tamil Nadu’s former chief minister, Jayalalithaa.

She is also shooting for Tejas, Dhaakad, Manikarnika Returns: The Legend Of Didda, and Emergency’ based on the life of India’s former Prime Minister Indira Gandhi in the pipeline.

Nora Fatehi’s ‘Zaalima Coca Cola’ from ‘Bhuj: The Pride of India’ to release on this date