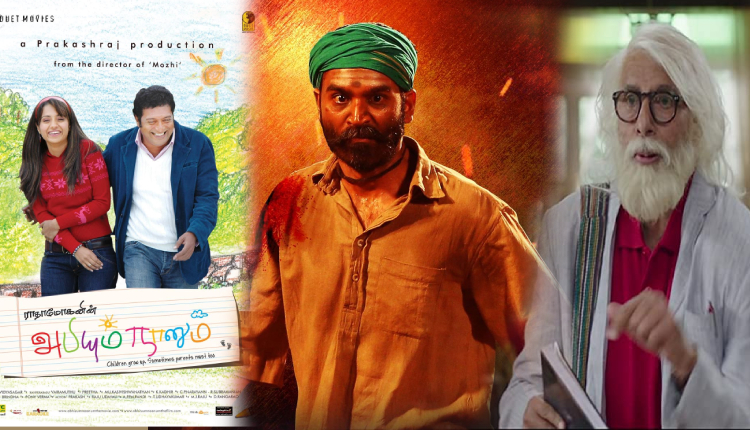 Indian cinema is famous for painting real-life characters on silver screens which have undoubtedly played an integral role in evolving a father-child relationship. Through movies like Thappad, Angrezi Medium, and Drishyam amongst others, we have seen that relationship be the epitome of compassion, care, and support. This Father’s Day, IMDb takes us on a nostalgic trip through its specially curated list of 15 Indian cinema dads who have beautifully portrayed a unique bond in these iconic movies.

The character portrayed is of a loving father who holds back his emotions from his son and wants him to live his life to the fullest. He supports him in every decision and encourages him to live the life he never got to live – a thing which remains as a sweet lesson with his son, even after his death.

One can witness a beautiful father-daughter relationship in the movie. Being daddy’s girl is what made things easy for the daughter. The fact she thought her partner will be someone like her father got her expectations soar high but when they crashed, her father was there to hold her from falling.

What makes Gajraj Rao a relatable father figure in Badhaai Ho is the chemistry that he shares with each of his family members. He is in the league of fathers who know how to make everyone in the family happy, but when things go sour will take a stand with what is right, and not with what is convenient.

The movie traces a beautiful bond between a father and his daughter. Irrfan Khan plays Champak, a dedicated and amazing father who is bent on sending his daughter to London for further studies amid all the issues he faces while arranging the fees.

This Tamil movie revolves around the relationship between Prakash Raj and his daughter Abhi, played by Trisha. The scene where Abhi celebrates her dad’s birthday in the midst of a lake on a full-moon night encapsulates their relationship. It not only portrays the father-daughter bond magically but also reminds us of the beauty of small things in life.

Yennai Arindhaal is a Tamil action thriller. The movie is essentially a police drama but director Gautham Menon has brought out the intricacies of a complex relationship between a stepfather and his stepdaughter. The father marries a woman with a small child and with love and affection, he nurtures her. During the course of the film, their bonding develops into a strong one, proving that fatherhood is all about being for and with your loved ones.

A father has the right to stop you from doing anything wrong but cannot control you beyond a level. Bommarillu, a Telugu romantic-comedy shows how a possessive father controls his son’s way of life at every step. The thought-provoking climax is sure to melt your heart.

Asuran, a Tamil action movie portrays the lurid side of casteism and a seemingly timid father’s courageous battle to protect his son even if it means sacrificing his own.

The film highlights an unusual relationship between a 75-year-old son and his 102-year-old father, who aspires to break the record for the longest living man but feels that with his son’s constant sulk, he won’t be able to achieve that. As the story unfolds, their beautiful relationship blooms as well.

Raazi movie is based on true events and chronicles the life of a woman who was married off to the son of a Pakistani general. She worked as a spy and passed on secret information from Pakistan to Indian intelligence. The daughter’s wedding in the movie captures every emotion that a daughter and her parents go through on her wedding day. The movie shows you an emotional side of the spy thriller and leaves you with a bittersweet feeling.

Geeta and Babita Phogat, whose life story has been narrated in this film, are true examples of fighters who have achieved great success and owe it all to their father, who carried the dream with him and trained them enough to achieve success and face the real world

Available to stream on Netflix

Inspired by the life of a fearless young officer who made history by becoming the first Indian female Air Force officer to fly in a combat zone during the 1999 Kargil War. Pankaj Tripathi, her daughter’s biggest ally rooted for her dream to become a pilot and gives her some important life lessons on how society will always want to cage free-spirited women and it’s up to the women to break free. The movie set in 1999 celebrates every aspect of a progressive father-daughter relationship

Available to stream on Netflix

Makarand Mane’s directorial national award Marathi film ‘Ringan’ or ‘the Quest’ in English is a heart-warming journey of a father and son. The endearing pursuit of a 7-year-old boy to find his dead mother, innocently mistaking her to be at God’s abode, and the tireless plight of his father. With no one else to turn to, they travel to Pandharpur, God’s abode, where each thinks they will find what they seek. This film celebrates the father-child relationship who are each other’s support in this journey

Uma, a child suffering from a terminal illness, wishes to see Durga Pooja held in Kolkata. Her father, along with a director, struggles to create a fake Durga Pooja to make her dreams come true. This Bengali drama shows how a real-life father-daughter’s bonding can become a reel-life magnum opus.

Dad is a son’s first hero and daughter’s first love. They can go to great lengths to protect their children. Drishyam is a crime thriller that exactly portrays this – a father going to extreme lengths to save his family from punishment after the daughter commits an accidental crime.

Switch to Yoga Mode with Reflex 3.0 on the International Yoga Day