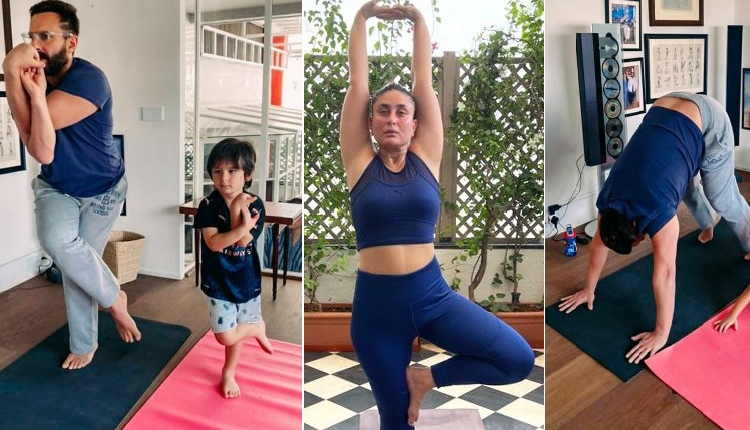 Diva Kareena Kapoor Khan celebrated the International Yoga Day with her husband Saif Ali Khan and son Taimur, she shared a glimpse of the father-son duo’s yoga session.
Kareena took to her social media profile and dropped two pictures of Saif Ali and Taimur performing Yoga at home. She captioned it, “Following suit for #InternationalYogaDay is the husband and the son… we are always inspiring each other because #inspiration starts at home…”
She also dropped a picture of herself performing Yoga. The caption read, “For me, my yoga journey began in 2006 when I signed Tashan and Jab We Met… an incredible one… which kept me fit and strong. Now after two babies and four months postpartum… this time I was just exhausted and in too much pain to get back but today I’m slowly and steadily getting back at it. My yoga time is my me time… and of course, consistency is key… so, keep at it people…On that note, I’m going to #StretchLikeACat and hope you do too. @pumaindia #InternationalYogaDay”
Meanwhile on the work front, Kapoor will next team with Aamir Khan for the third time in Laal Singh Chaddha, a remake of the American comedy-drama Forrest Gump (1994).
She will also portray the Mughal princess Jahanara Begum in Karan Johar’s directorial venture Takht, a historical drama featuring an ensemble cast, including Ranveer Singh, Vicky Kaushal, and Alia Bhatt.