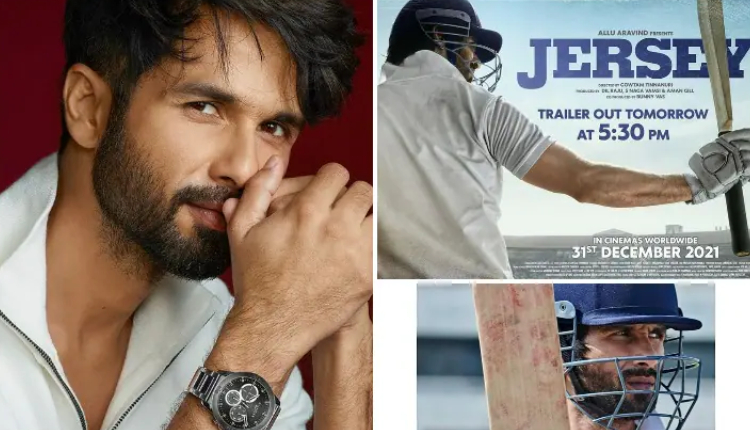 Shahid Kapoor starrer Jersey is a sports drama revolving around a thirty-six year old cricketer who stopped his cricketing career ten years ago, now aiming to play for the Indian team, the trailer for the same will be out tomorrow.

Sharing a brand new poster and deeds on the trailer, Shahid Kapoor took to his social media profile and shared, “ITS TIME! We have waited to share this emotion with you for 2 years. This story is special. This team is special. This character is special. And the fact that we get to share it on the big screen with you all is special. I don’t have words to express my gratitude. I hope you all feel what I felt when I played him. Here we go @mrunalthakur @gowtamnaidu #AlluAravind @amanthegill @alluents @dilrajuprodctns @sitharaentertainments @bratfilmsofficial @jerseythefilm”

The film is written and directed by Gowtam Tinnanuri, a remake of his 2019 Telugu film of the same title. The film also stars Mrunal Thakur and Pankaj Kapur. The film is produced by Allu Aravind, Aman Gill, Dil Raju, and Suryadevara Naga Vamsi.

Apart from Jersey, actor Shahid Kapoor is also collaborating with Ali Abbas Zafar for the first time for an action thriller, the film has been announced and shooting has started but the makers haven’t confirmed the title of the film.