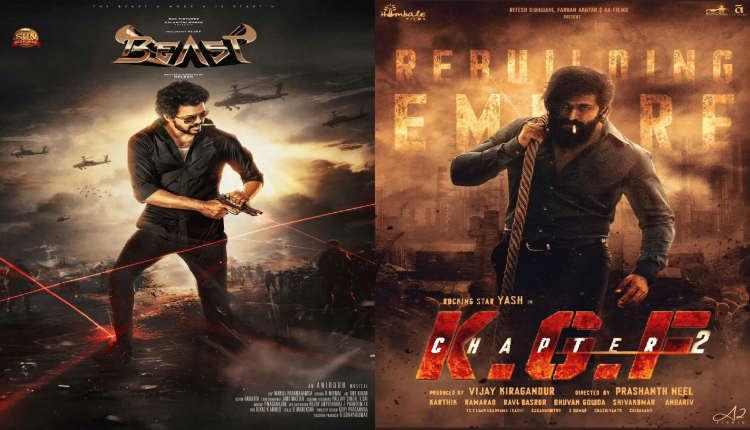 With K.G.F: Chapter 1 breaking records at the box office, it is no surprise that K.G.F: Chapter 2 is the most anticipated release of April 2022. Audiences are excited for the big hits slated to release this month.

Among the Indian movies and web series released in theatres or on streaming platforms during the month of April, these 10 titles were consistently most popular during a set pre-release window determined by the actual page views of IMDb fans in India. The rankings and release date information are based on data as of March 24, 2022.

K.G.F: Chapter 2 – K.G.F: Chapter 2 is a sequel to the blockbuster movie K.G.F: Chapter 1 which is a period action film written and directed by Prashanth Neel. The blood-soaked land of Kolar Gold Fields (KGF) has a new overlord now, Rocky. Bloodier battles and darker days await as Rocky continues on his quest for unchallenged supremacy.

Attack – Witness the rise of an army soldier as he realizes his destiny and comes to terms with becoming India’s first super-soldier created to combat terrorists as he fights his inner demons and outer enemies.
Director: Lakshya Raj Anand I Stars: Jacqueline Fernandez, Rakul Preet Singh, John Abraham

Heropanti 2– an upcoming Indian Hindi-language romantic action film and a sequel to the 2014 film Heropanti. Babloo is a computer genius and Inaaya is a self-made billionaire. The two fall in love but due to unforeseen circumstances they suddenly part ways. When they are reunited, action, drama and edge of the seat thrills follow as the world wants Babloo dead.
Director: Ahmed Khan, Akash Solanki Official I Stars: Tiger Shroff, Abhinay Raj Singh, Tara Sutaria

Runway 34- The film is inspired by the true story of the Jet Airways Doha-Kochi flight. The incident took place in 2015 when the flight had a narrow escape after facing difficulties to land at the airport due to bad weather and unclear visibility.
Director: Ajay Devgn| Stars: Ajay Devgn, Amitabh Bachchan, Rakul Preet Singh

Abhay – Season 3 of Abhay, also known as Abhay 3, centres on ACP Abhay, who with his team battles killers that are led by a cult leader, to save the lives of innocent people.
Director: Ken Ghosh Stars: Kunal Khemu

Acharya– Touted to be a socio-political actioner, the plot revolves around a middle-aged Naxalite-turned-social reformer who launches a fight against the Endowments Department over the misappropriation of temple funds and donations.
Director: Koratala Siva | Stars: Chiranjeevi, Ram Charan, Kajal Aggarwal

Streaming on Netflix from April 7, 2022, onwards

Galwakdi – Jagteshwar, a librarian, has an obsessive-compulsive personality disorder (OCPD), which people around him have accepted both at work and at home. Ideologies clash and things change when, Amberdeep,a high-spirited girl in nature, and Jagteshwar meet. What appears in the first instance to be a fun love story, turns out to be much more than that in the end.
Director: Sharan Art | Stars: Tarsem Jassar, Wamiqa Gabbi, B.N Sharma