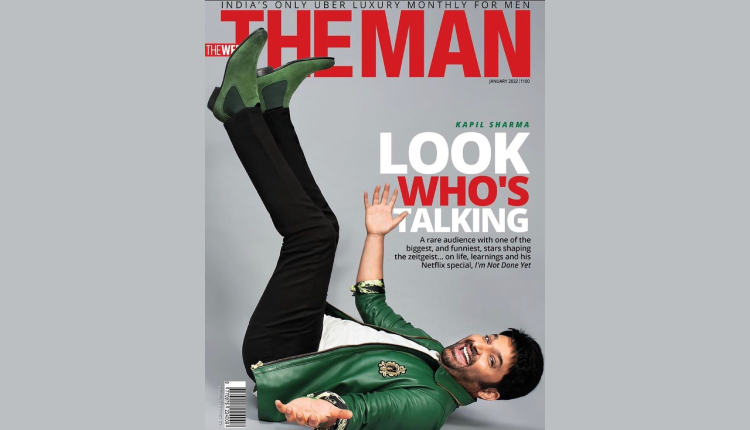 King of comedy, Kapil Sharma has turned cover-star for leading The Man magazine for the entire month of January. The talented and gifted comedian looks handsome on the cover spread, he is upside down though.

Sharing the cover spread with his fans, Kail Sharma captioned his post, “Thank you @themanmagazineindia for this beautiful cover…finally you got the right Man…lots of love #gratitude #theman #themanjanuary #kapilsharmafortheman #kapilsharma”

On the cover spread, Kapil is wearing a green leather embroidered jacket by Punit Singh, a white T-shirt, green suede boots by Italian, and black jeans.

After ruling the Indian Television with his ever smiling self, Kapil Sharma is all set to make his Netflix debut with a super special show, Kapil Sharma – I’m Not Done Yet. The teaser for stand up special is already out and much awaited by the fans.

In the show teaser, Kapil Sharma talks about his comedy career, which spans more than 2 decades and half of it has been spent on Television and his recent legal troubles, where he ended up tweeting some uncalled for slanders, which landed him in legal issues. The project will release on the streaming platform on 28th January.

Meanwhile, Kapil is currently busy working on ‘The Kapil Sharma Show. Apart from his famous comedy show, Kapil has also starred in movies such as ‘Kis Kisko Pyaar Karoon’ and ‘Firangi’, among others.