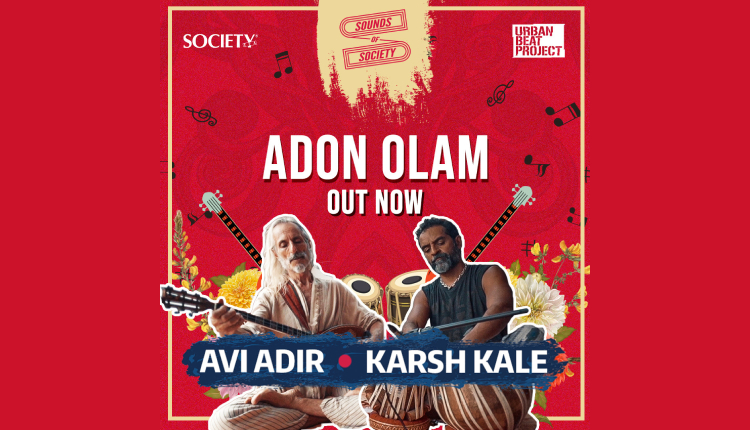 Adom Olam in Hebrew means Eternal Master. This song is an ancient Hebrew hymn, re-imagined by Avi Adir, a multi-instrumentalist world musician, who together with Karsh Kale – an award-winning musician, composer, percussionist – explores the idea of silence in spirituality, and the space between the noise and matter, of saying more with less within the structure of a musical piece, as in real life.

Sounds of Society is a genre-free, no-rules, and all-inclusive approach to presenting music-making and its associated performing arts. It is a great platform for musicians to showcase their grassroots approach to making music, in an entirely collaborative format. Sounds of Society – Season 2 has been shot with minimal fuss and equipment. The season will have edited as well as one-take videos to show audiences the true organic nature of each episode.

In this episode, Avi creates an otherworldly musical experience with his fluid and transcendental singing style, punctuated by Karsh’s well-timed and nuanced Tabla beats. The idea that there is more to gain by allowing ourselves to explore the silence within and the space between the noise we create for ourselves, we may yet find ourselves, like a deep breath after a long exhale.

As Avi Adir puts it in a very poetic way, “While we are awake, and in an intention to create, then we have the space. And this space is part of the music, as breath is part of life.”

Described by Billboard Magazine as a “visionary composer and producer”, Karsh Kale today is known as a pioneer in the world of global fusion. His career has gone through many avatars over the past 20 years as he jumps between the various roles of being a world-renowned tabla player, drummer, DJ/ remix artist, vocalist, multi-instrumentalist, film composer, as well as a bandleader and curator all with equal ease. Karsh Kale has also developed a reputation as a genre-bending collaborator which has led him to work with some of the most renowned artists from around the globe. Be it with his live ensembles, or as a world-renowned producer, Karsh Kale continues to push the boundaries of music to places it hasn’t been as well as continues to be one the most sought after collaborators of his generation.

Having seen and travelled the world Avi Adir has been inspired by its vibration. Loosened from identification to any nation or country, his music arises from the core, an ancient Sufi spirit blends into a divine connection with a deep emotional expression. His forte is to create a genuine experience sharing a fusion of composition and improvisation at the same time.

Conducting into a mystical sphere, a gateway opens and grants to exit the mind entering the path of the soul and the heart. Avi Adir’s majestic usage of authentic voice emphasizes his sensitive assembly. He carries the listener into a celestial realm. Connecting middle-east acoustics far over to the classical east and ancient western roots onwards to the pure channel of existence. A magnificent free-flow sound garden to touch and inspire the audience in their own creativity and musicality builds up as the multi-instrumentalist shares the natural love to sing and dance. Based on a belief that if there would be no colour, everything will appear Orange, like Fire, Sun, and God.

Expressing his excitement, Karan Shah, Director, Society Tea said, “Music can be as energizing for a disheartened soul like a cup of tea. It is founded in our lives so that the heavy experiences seem smoother to deal with. Sounds of Society: Season 2 is a call to that creative spirit that resides within us. Here we collaborate with versatile musicians who create flavourful music with no compromise. We expect that this series of delightful, courageous and organic music will make its place in the hearts and minds of our listeners. We strive towards keeping the spirit of creativity and hope ignited within us through this latest episode.”

Produced by Urban Beat Project and curated by Laiq Qureshi, the collaborations in each episode represent the already existing and ever-evolving synergies in the musical world. Much of what is captured is entirely spontaneous, without any concrete rehearsals. “Some of the best music is made when musicians from different corners of the world come together without any real aim in mind, and when they are free to go anywhere particular with their music. Like in a jam. What comes out is pure and organic. This is what we want to showcase.” says Laiq Qureshi, founder of Urban Beat Project.

Sounds of Society hopes to feature what music sounds like on the street, on a terrace, in your bedroom, on the beach, or in your backyard. The only real aim is to document the social and cultural milieu in which we live, by presenting the sounds of today.