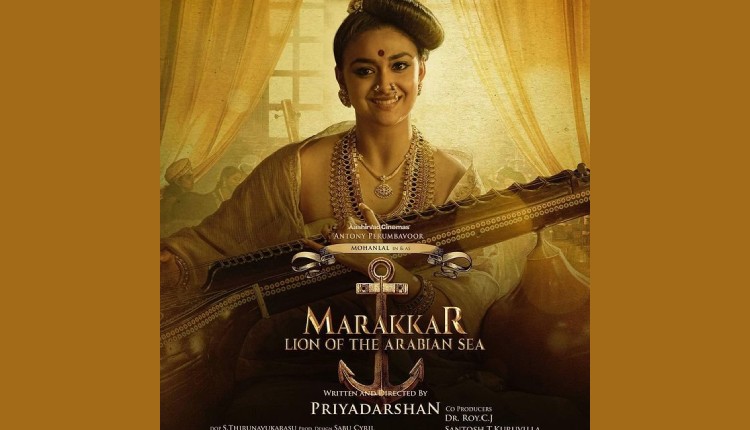 Basking the glory of Annaatthe with Rajinikanth, actress Keerthy Suresh will next be seen in Marakkar – Lion Of The Arabian Sea with Mohanlal, playing the role of Aarcha.

Actress Keerthy Suresh just took to her social media profile and dropped a stunning first look poster for her character from the forthcoming historic drama. She captioned her post, “Thrilled to be portraying the charming and valiant #Aarcha! Get ready to witness the grand spectacle of #Marakkar. Coming to a screen near you on December 2nd! #MarakkarArabikadalinteSimham @mohanlal @priyadarshan.official @antonyperumbavoor @suniel.shetty @arjunsarjaa @manju.warrier @pranavmohanlal @kalyanipriyadarshan @aashirvadcine #PrabhuGaneshan #sabucyril #doptiru #MarakkarMovie #Dec2”

The film is written and directed by Priyadarshan. The film stars Mohanlal in the title role, it also stars Arjun Sarja, Suniel Shetty, Prabhu, Manju Warrier, Mukesh, Siddique, Nedumudi Venu and Pranav Mohanlal in supporting roles.
Also known as Marakkar: Arabikadalinte Simham is the most expensive Malayalam film ever made. The film was originally scheduled for release on 26 March 2020, along with its dubbed versions in Tamil, Telugu, Kannada, Hindi and English languages.

The film was produced by Aashirvad Cinemas with Moonshot Entertainments and Confident Group as co-producers. The release was postponed due to the COVID-19 pandemic. The film is now confirmed to hit screens on 2 December 2021.