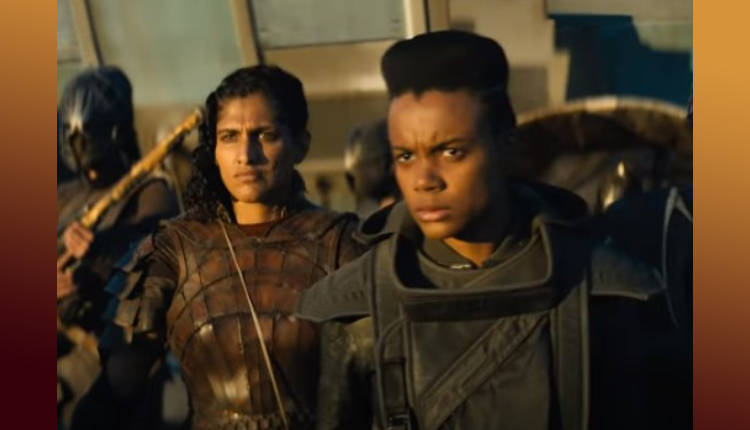 Share
The trailer of Apple TV Plus’s new offering sci-fi series Foundation is out and this one stars Kubbra Sait along with Lee Pace, Jared Harris, Lou Llobell, Leah Harvey, Laura Birn,           Cassian Bilton, Terrence Mann and Alfred Enoch.
Kubbra Sait dropped the trailer on her social media profile. She captioned it, “Foundation – 9.24.2021…Stoked! Thrilled! Relieved! Here it is…for posterity… @appletv @skydance jaredharris @leeepfrog @loullobell @_leah_harvey_ @iamaliciagerrard @terrencemann_ @laura_birn @danmacpherson @pravesshranaofficial @nickyparmar13 @cassianbilton”
The series is based on the epic books by Isaac Asimov, the storyline of the series is set in a galactic empire with a band of exiles being on the quest to save the humanity. The exiles are led by Jared Harris’ character Dr Hari Seldon.
Screenwriter of the Dark Knight trilogy, David S Goyer serves as the show-runner and executive producer of Foundation. The first trailer of Foundation was released by Apple TV Plus in June last year.
Foundation will debut on September 24th, with the first three (of 10) episodes available initially. Subsequent episodes will debut every Friday after that. It will follow another high-profile release, with Ted Lasso’s second season premiering in July.
Kubbra Sait Unveils
Share FacebookWhatsAppLinkedinTwitterPinterestEmailFacebook MessengerTelegramViberPrint

Pride Month: An ode to Ekta Kapoor & ALTBalaji for being a true ally to the LGBT community