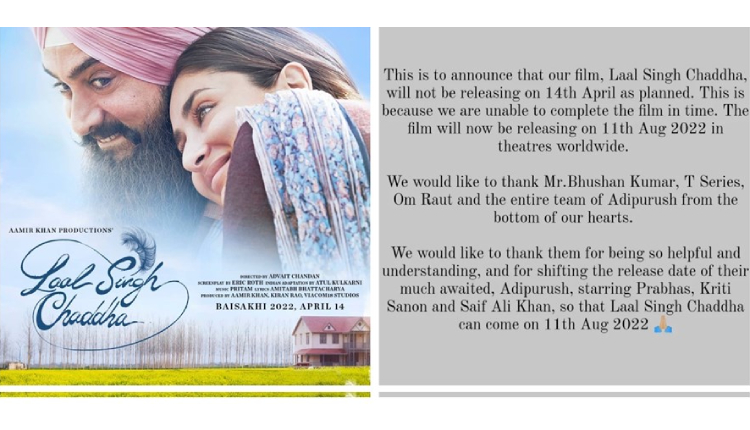 After being delayed several times, the release of Aamir Khan and Kareena Kapoor Khan starrer ‘Laal Singh Chaddha’ has been pushed one more time. The film, which was earlier supposed to grace the theatres on April 14, will now be out on August 11.

The official handle of Aamir Khan Productions released a statement regarding the same. Kareena Kapoor Khanrs also announced that Prabhas-starrer Adipurush, which was scheduled to release on August 11, has now been moved. The caption read, “#LaalSinghChaddha @viacom18studios @tseriesfilms”

The statement read, “This is to announce that our film, Laal Singh Chaddha, will not be releasing on 14th April as planned. This is because we are unable to complete the film in time. The film will now be released on 11 Aug 2022 in theatres worldwide. We would like to thank Mr Bhushan Kumar, T Series and Om Raut and the entire team of Adipurush from the bottom of our hearts”

Laal Singh Chaddha’ is the official Hindi remake of the Hollywood film Forrest Gump, which starred Tom Hanks in the lead role.

Helmed by Advait Chandan and the screenplay were written by Eric Roth and Atul Kulkarni. The film also stars Mona Singh and Naga Chaitanya in the lead roles.

The film is produced by Aamir Khan Productions, Viacom18 Studios and Paramount Pictures.