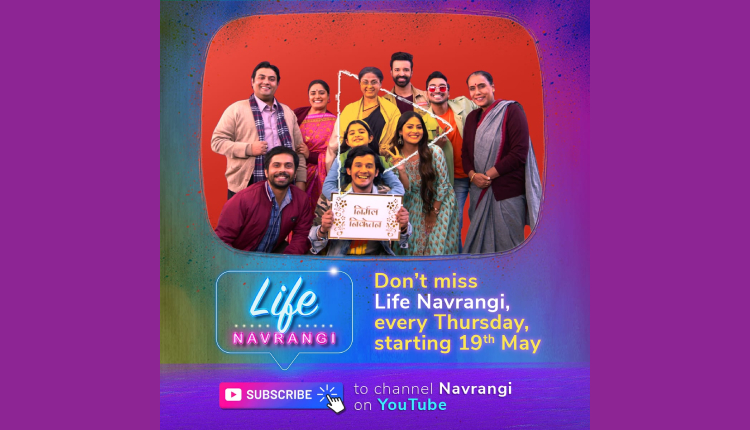 The series follows the successful 26-episode television drama Navrangi Re! broadcast by Viacom18 on three of its channels and OTT platforms in 2019. Both dramas were supported by the Bill & Melinda Gates Foundation.

Life Navrangi and its key character Vishwas, a young journalist, once again played by Aamir Ali, is all set to entertain, educate, and jolt people out of their doom scrolling. The heroine of this show is a runaway bride Saloni, a budding YouTuber, known better as #SimplySaloni. What happens when they meet? They team up to launch a YouTube channel, on which they tell real stories (as opposed to fake news) that make a difference to people’s lives.

How do they reinvent themselves? Who else becomes part of their lives? Is there something that’s hidden in plain sight about their relationship from people in the mohalla (neighbourhood)? Are they going to tell new stories? The answers lie in Life Navrangi.

Directed by Debatma Mandal, Life Navrangi was shot in Bhopal and consists of seven episodes, each of 22-26 minutes, aiming to increase awareness and civic engagement around the issue of faecal sludge management (FSM) in India. The drama has a stellar cast featuring thespians such as Aamir Ali, Krishna Mukherjee, Tiku Talsania, Swaroopa Ghosh and Dolly Minhas, and young talented actors such as Krishna Mukherjee, Rohit Gujjar and Rohit Pargai. The show also includes actors from Bhopal, which has a rich theatre and performing arts tradition.

Aamir Ali, who reprises the role of Vishwas said, “I love my role – that of a disillusioned TV anchor, who has quit his plum job, because he wants to tell real stories, as opposed to fake news. I, with my female lead, launch a channel called Tedhi Medhi Kahani (Quirky Tales) – and you will see what happens when we do our stories! I am excited about being associated with the Bill & Melinda Gates Foundation and BBC Media Action in creating conversation around the important issue of sanitation. This show was a lot of fun to shoot, and I hope it increases awareness and positively influences behavior change with respect to sanitation practices.”

Krishna Mukherjee, who plays the female lead, Saloni said, “I am a runaway bride, bubbling with ambition to ‘settle down’ in my career! My character, in fact, all the female characters in Life Navrangi have been crafted carefully from a gender perspective so that viewers can relate to their situations and struggles. The power dynamics between male and female characters is very interesting and it was a fabulous opportunity to play a role that I truly believed in.”

Life Navrangi navigates relevant and interesting issues – plans and difficulties about owning one’s dream home, making a mark in one’s profession, dealing with debt and a marriage threatening to fall apart. In the story, correct FSM services almost become a metaphor for a more organised way of living, managing resources and relationships, achieving one’s goals. The female characters in the show all have voice and agency and act to do what is right. Gender norms are a constant subtext running through the narrative, as is breaking gender stereotypes.

Tasalli Se on Amazon miniTV will shower you with the sweetest emotions and here’s how!