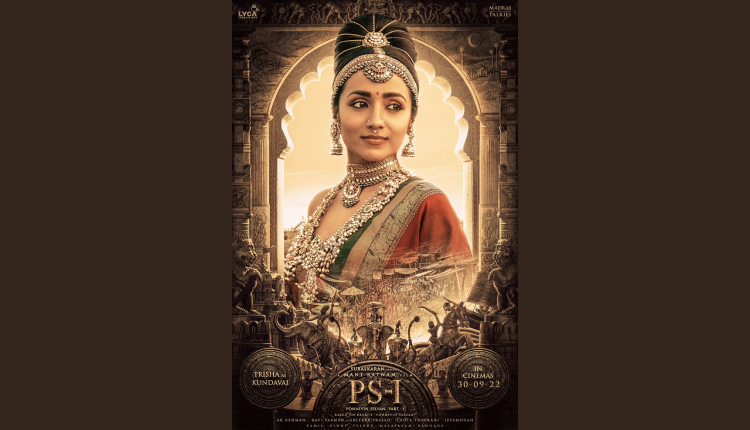 The official handle of Madras Talkies shared the first look poster for Trisha, the caption read, “ In a world of men, a woman of courage. Presenting Princess Kundavai! #PS1 releasing in theatres on 30th September in Tamil, Hindi, Telugu, Malayalam and Kannada! @lyca_productions #ManiRatnam @arrahman”

Ponniyin Selvan: I also known as PS-I, is an upcoming epic period drama film directed and co-produced by Mani Ratnam, under his production studio Madras Talkies, along with Allirajah Subaskaran under the banner Lyca Productions. It is the first of two cinematic parts based on Kalki Krishnamurthy’s 1955 novel Ponniyin Selvan. The film is written by Ratnam along with Elango Kumaravel and B. Jeyamohan.

The film’s music is composed by A. R. Rahman, with cinematography handled by Ravi Varman, editing done by A. Sreekar Prasad and production design by Thota Tharani respectively.

Made on a budget of 500 crore (US$66 million), Ponniyin Selvan: I is one of the most expensive Indian films. The film is scheduled to be have a worldwide theatrical release on 30 September 2022.

The Ghost First Visual Out On This Date