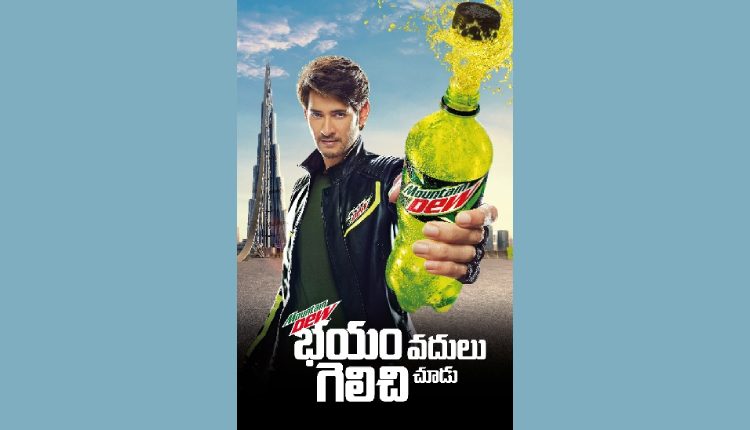 Mountain Dew® has always maintained that the difference between ‘ordinary’ & ‘extraordinary’ is the decision to move beyond fears & self-doubt. Continuing its efforts to inspire the youth of India to overcome their fears through gripping films, Mountain Dew® today unveiled its new Darr Ke Aage Jeet Hai campaign.

Accompanying the campaign, the beverage brand has rolled out a high-octane TVC today featuring its new brand ambassador and megastar Mahesh Babu. Shot on the top of the world’s tallest building – Emaar’s Burj Khalifa in Dubai, the new film is a thrilling showcase that is set to leave audiences at the edge of their seats. The TVC is a reiteration of Mountain Dew®’s belief that in the face of any challenge there are 2 choices; either succumb to fear or overcome it & move ahead – it is this choice that sets the real heroes apart from the rest.

The TVC opens to a birds-eye view shot from the top of the Burj Khalifa where Mahesh gears up to represent India by performing a daredevil stunt and making a new world record. The film showcases the dilemma & the determination of Mahesh Babu as he evaluates the choice in front of him. Mahesh takes a sip of Mountain Dew®, a resolute look crosses his face as he plunges off from the top of Burj Khalifa on his bike defying all odds.

Speeding down from his bike from Burj Khalifa on a slim runway, Mahesh leaves the audience on-ground gasping with disbelief and fear as he falters and skids mid-way. However, with an unwavering spirit, Mahesh successfully makes his way to the end of the runway and emerges as a winner as the audience applaud him for this jaw-dropping action.

Vineet Sharma, Category Director- Mountain Dew & Sting, PepsiCo India said, “With our ‘Darr Ke Aage Jeet Hai’ philosophy, Mountain Dew continues to celebrate the spirit of those who push themselves in the face of fear to achieve extraordinary results. With this new campaign, the brand reiterates that real heroes are those who face challenges head-on and emerge as winners. Mahesh embodies the courage and determination that a true hero is made of, and I am confident that this action-packed film on the top of Burj Khalifa will strike a chord with our consumers. We hope that this campaign encourages our audiences to overcome their fear and move ahead on the path to victory.”

Speaking about his experience of shooting the TVC, brand ambassador Mahesh Babu said, “I have learned that while everyone faces fear in some form or the other, facing it head-on is the best way to tackle it and salute everyone who is growing through this challenge and trying to overcome it. I strongly believe in Mountain Dew’s philosophy of ‘Darr Ke Aage Jeet Hai’ and I am thrilled to be bringing this philosophy alive on screen. I am confident that this adventurous film will resonate strongly with my viewers and inspire them to tackle their fears with courage.”

The Mountain Dew® TVC will be amplified across TV, digital, outdoor, and social media with a 360-degree campaign. Mountain Dew® is available in single/multi-serve packs across modern and traditional retail outlets as well as on leading e-commerce platforms.

2022 Movie Preview By Netflix Is EPIC