Mrunal Thakur is surely going to surprise you on Amazon miniTV’s upcoming romantic drama Jahaan, which you can watch for free on Amazon’s shopping app 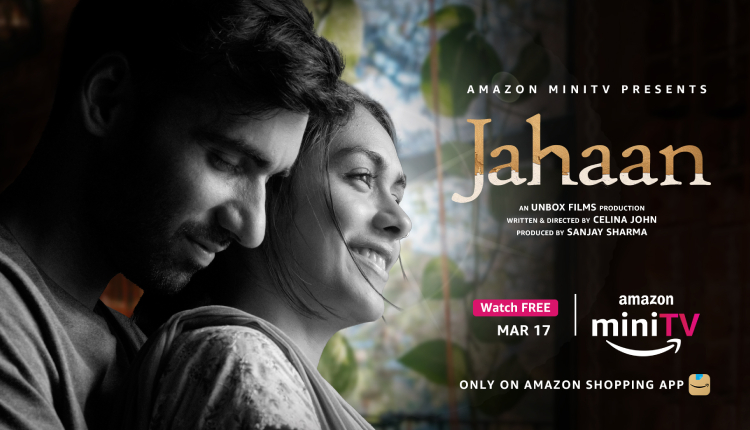 Jahaan is a short film that narrates a gripping story of a young couple – Ghazal and Inder, who are passionately in love. Facing ups and downs in their marital life, the partners are living in a house that they feel emotionally connected to. The story is peppered with emotions of a couple moving forward when their estate broker (played by Gopal Datt) tries to find a new tenant, while Ghazal and Inder have no intention to let go of the house.

“Amazon miniTV has a great collection of new-age content, and we are happy to add another gem to our library. We believe in narrating stories that resonate well with audiences at large and Jahaan is one such offering that will leave a lasting impression on the audience. We are excited to present this short film in collaboration with Unbox Films to our viewers across India for free on miniTV Amazon’s shopping app,” said Girish Prabhu, Head of Amazon Advertising.

“Jahaan is one of our most special projects. This short film narrates a very innocent yet riveting love story that will surely entertain audiences. Jahaan’s premiere on Amazon miniTV will ensure that this film travels across the length and breadth of the country given the wide reach of the Amazon shopping app. Audiences are in for a treat for free!” added, Sanjay Sharma, Producer, Unbox Films.

The strong narrative and powerful on-screen performances have led the short film to win several awards both nationally as well in the international circuit. The short film has gone on to bag the Best Producer Award at the Hollywood Gold Awards, The Gangtok International Film Festival and The World Film Carnival to taking home the Women’s Cinema Collection – Director at the Bengaluru International Short Film Festival. Not just that, it has also featured in the Official Selection at The Standalone Film Fest & Award, The New York Flash Film Festival and Sessions by Lift-Off Global Network.

Jahaan will premiere exclusively on Amazon mini tv on the Amazon shopping app on March 17.