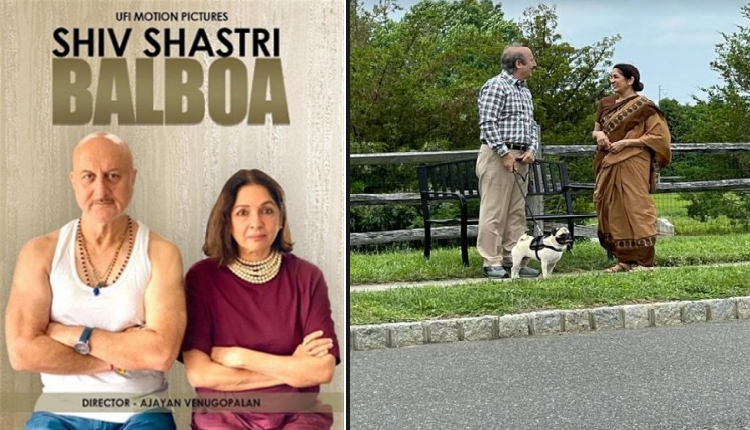 Anupam Kher and Neena Gupta currently shooting in the US for their film ‘Shiv Shastri Balboa’ and the duo has been sharing glimpses from their set life for their fans. The film is Anupam Kher’s 519th Film. Now Neena Gupta shares a lovely picture with him from the sets which leave the fans quite excited for the film.

The picture is from a scene from their upcoming film ‘Shiv Shastri Balboa’. In the picture, we can see Anupam Kher with a dog and both the actors are dressed in their characters for the film.

Neena Gupta also introduced her character from the film in a special post. Dressed in a simple saree, she posted a photo of hers and wrote,” This is Elsa in #ShivShastriBalboa.”

Even Anupam Kher has been sharing stills from the sets showcasing various shades of his character in the film.

The film Shiv Shastri Balboa is directed by Ajayan Venugopalan and will have elements of humour and drama. It is the survival story of an Indian in a small town in America. Recently the poster of the film was released.

On the work front, Neena Gupta is all geared up for her next release ‘Dial 100’ which is a thriller drama directed by Rensil D’Silva and produced by Sony Pictures Films India, Siddharth P. Malhotra and Sapna Malhotra. The film also features Manoj Bajpayee and Sakshi Tanwar and is releasing on 6th August on ZEE5.