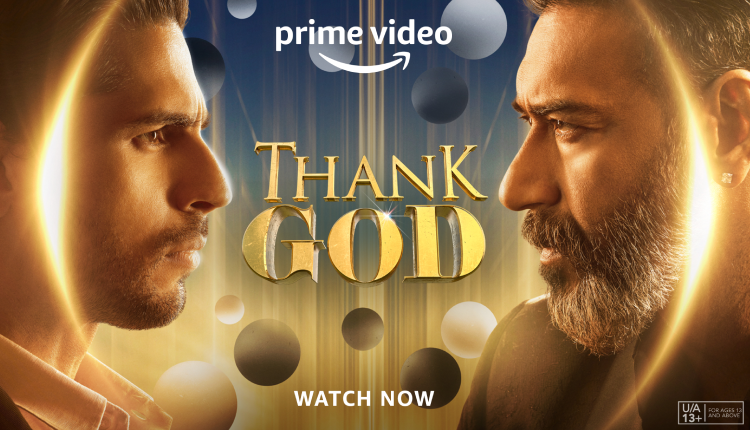 Prime Video today announced the worldwide digital premiere of the Hindi comedy drama movie, Thank God. Directed by Indra Kumar, the film stars Ajay Devgn, Sidharth Malhotra, and Rakul Preet Singh in lead roles. The film revolves around an accident that claims the life of a self-centred real estate agent (Sidharth) who is deeply in debt. God suddenly shows up in front of him and says that from now on, he must participate in a ‘Game of Life.’ If he wins, he will be returned to Earth, or else he will be damned to hell. Prime members in India and across 240 countries and territories can stream this out-of-this-world comedy from December 20, 2022.

On the digital release of Thank God, Ajay Devgn shares, “It was a delight to work with Sidharth Malhotra, and Rakul Preet in this film. I have also worked with the director Indra Kumar in the past, so this film was like our reunion. It was always fun to be on sets with such an energetic and talented cast and I believe that chemistry has reflected on the screens as well. I would like to express my gratitude to the audience who have given an immensely positive response to the film. I’m sure that with its digital release on Prime Video on 20th December our fans and audiences across the globe will enjoy the film.”

Sridevi Chiranjeevi Is Out From Waltair Veerayya