Prime Video Announces the Streaming Premiere of Mohanlal-Starrer and National Award Winner, Marakkar: Lion of the Arabian Sea in India 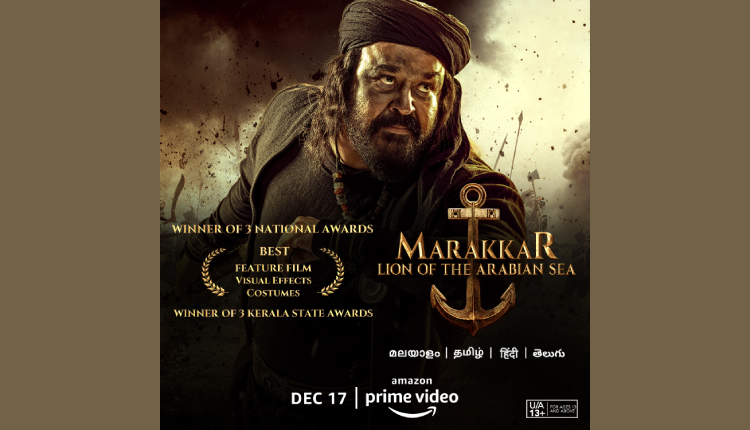 Prime Video, one of India’s most loved entertainment destinations, brings to your screens the exclusive streaming premiere of the biggest epic adventure of the year with Marakkar: Lion of the Arabian Sea, starring legendary actor Mohanlal in the titular role. Written and directed by Priyadarshan and produced by Antony Perumbavoor of Aashirvad Cinemas, the Malayalam magnum opus boasts of an incredibly stellar cast with Arjun Sarja, Suniel Shetty, Manju Warrier, Keerthy Suresh, the late Nedumudi Venu, and Pranav Mohanlal in pivotal roles. The movie, which was released theatrically earlier this month, will be premiering on Prime Video starting on 17 December in India and will also be available in Hindi, Tamil, and Telugu.

This lavishly mounted period drama is a biopic of Kunjali Marakkar IV, who is considered to be one of the greatest naval chiefs of India. It tells the story of the epic warfare against the Portuguese invaders led by this fearless seafarer of the Malabar Coast who later became the naval commander of the Zamorin, the ruler of Calicut. Credited to be the most expensive film ever made in Malayalam cinema, it bagged the Best Feature Film, Best Special Effects, and Best Costume awards at the 67th National Film Awards in October 2021.

“I am overwhelmed by the audience reactions the movie has received and thank each and every one of my fans for their love. It is a matter of pride for me to be a part of this extravaganza that brings alive the legendary story of Kunjali Marakkar, a man known as India’s very first Naval Commander and famed in Kerala folklore,” said well-acclaimed actor Mohanlal. “I believe this is a story that will touch the hearts and emotional strings of every Indian. To be able to bring it to life on such an extraordinary scale is a dream come true for me. I am more than happy about the digital premiere of Marakkar on Prime Video, which will give viewers across the country an opportunity to watch the movie from the comfort of their homes, along with their families.”

“I am super excited about the digital premiere of Marakkar: Lion of the Arabian Sea on Prime Video. This film is very close to my heart and has been a collective dream for Lalettan and me for the last 20 years. I am thankful to him for his support in making this project a reality,” said Priyadarshan, writer and director of the film. “Marakkar is not just a movie but a spectacle; an experience that will be remembered forever. I am happy and thrilled that it will be watched by audiences across India and cannot wait for the digital premiere on Prime Video.”

Manish Menghani, Head of Content Licensing, Amazon Prime Video, India added: “We are proud to present the streaming premiere of the award-winning magnum opus Marakkar: Lion of the Arabian Sea on Prime Video. We are delighted to collaborate once again with Aashirvad Cinemas and bring the unbeatable actor-director combination of Mohanlal and Priyadarshan, reinforced by a fabulous cast and crew, to our audiences. Prime Video takes pride in taking a customer-first approach and we are thrilled to end the year with this much-awaited, mega entertainer.”