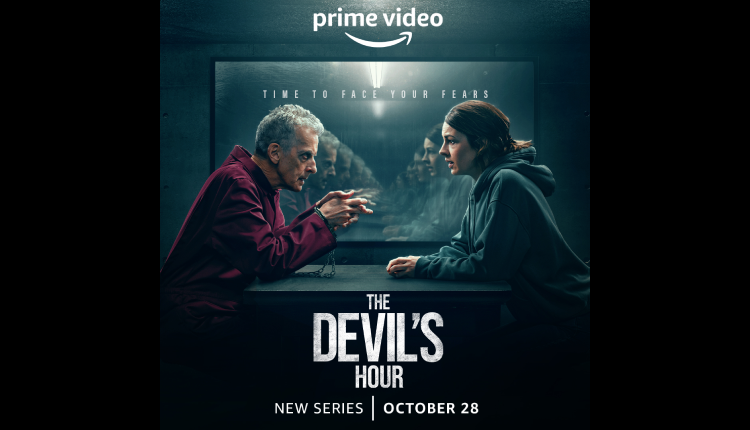 Prime Video will take viewers into The Devil’s Hour twice more, as the hit UK Original thriller is confirmed to return for a second and third series. Jessica Raine (Patrick Melrose) and Peter Capaldi (Paddington) will reprise their roles as Gideon and Lucy Chambers, alongside Nikesh Patel (Starstruck), Phil Dunster (Ted Lasso), Meera Syal (Yesterday), Benjamin Chivers, and new characters. The new series will launch exclusively on Prime Video in over 240 countries and territories and filming will start early next year.

The next two instalments of the critically acclaimed Amazon Original will continue the story of Lucy Chambers (Jessica Raine), a woman caught up in the hunt for serial killer Gideon (Peter Capaldi) in ways she never could imagine. In Series Two, Gideon’s true intentions are finally revealed, as he attempts to involve Lucy in his mission to stop an elusive force of evil. Simultaneously a sequel and a prequel to the first chapter, expect nothing but the unexpected…

“We’re thrilled with the audience response to The Devil’s Hour, and can’t wait to share the next chapter of this mind-bending story,” said Dan Grabiner, head of UK Originals, Amazon Studios. “Fans can look forward to plenty more twists and turns in this remarkable tale from first-time series creator Tom Moran, and welcoming back our immensely talented cast, led by Jessica Raine and Peter Capaldi.”

Sue Vertue, executive producer and CEO of Hartswood Films, said, “It goes without saying that we are over the moon to be continuing Lucy’s story with two more series. Tom Moran and his big brain have so much more planned for us all. This was always envisioned as a three-series arc, and it’s going to be a thrilling ride.”

“Telling a story on television is a precarious business,” added Tom Moran, writer and creator. “Series One of The Devil’s Hour was just the beginning—the opening act of a TV novel. I’m so thrilled that we get to keep turning those pages and slotting the puzzle pieces into place. If you thought the final episode of Series One had all the answers, then you haven’t been asking the right questions.”

The second and third series of The Devil’s Hour represents the growing UK Original slate that is available on Prime Video, along with new UK-produced series and movies launching across 2022 and 2023. These include 007’s Road to a Million, an unscripted adventure series inspired by James Bond; a feature-length documentary on YouTuber KSI, executive produced by Louis Theroux; true-crime series The Confession; The Rig, starring Martin Compston and Emily Hampshire; Mammals, written by Jez Butterworth and starring James Corden and Sally Hawkins; and My Policeman, starring Harry Styles, Emma Corrin, and David Dawson.

Prime Video offers thousands of popular movies and TV shows, award-winning Amazon Originals and other exclusives, sports, and more including other UK-produced Amazon Originals such as The Grand Tour, All or Nothing: Arsenal, Clarkson’s Farm, and James May: Our Man In Italy, U.S. hits like The Boys and Reacher as well as exclusive TV shows like Star Trek: Picard, Nine Perfect Strangers, and Little Fires Everywhere; movies like Coming 2 America, Borat Subsequent Moviefilm, and BAFTA-nominated Everybody’s Talking About Jamie; plus live sport, including live coverage of Premier League football matches, Autumn Nations Series international rugby union, plus exclusive coverage of US Open, ATP Tour, and WTA Tour tennis. All available at no additional cost as part of Prime Video, which is available in more than 240 countries and territories worldwide (offers and titles vary based on location).