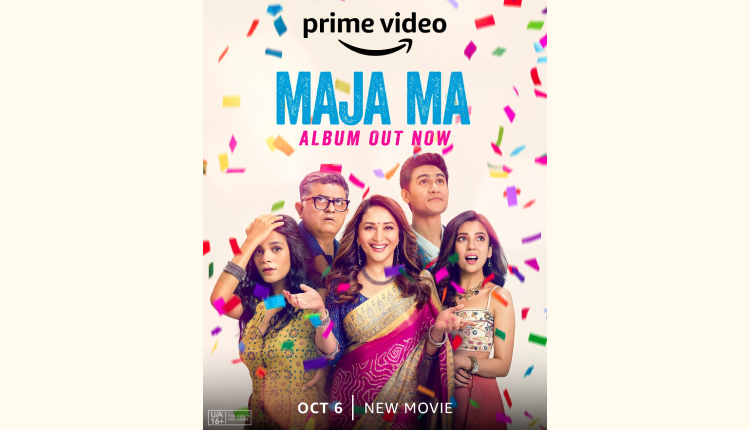 The music of Maja Ma has been making waves, with the energetic ‘Boom Padi’ and the catchy and playful ‘Ae Pagli’, which have been topping the charts and have given audiences the hook-steps of the year. Three days before the premiere of the film on the streaming service, Prime Video dropped the music album, which brings together talented composers like Souumil Shringarpure, Siddharth Mahadevan, Gourov Dasgupta and Anurag Sharma.

Link to the Jukebox: https://youtu.be/iljZNDn5Nyw

Producer Amritpal Singh Bindra and Anand Tiwari believe that for a family entertainer like Maja Ma, music plays a very critical role in giving viewers a wholesome entertainment experience. Said Amrit and Anand, “Music for us has always been a narrative tool. Like Bandish Bandits, for Maja Ma too music is an integral part of the story. Maja Ma is a relationship drama which is set against a festive backdrop and a lively, fun Indian wedding. Music plays a very important role in the film, and is intricately woven into the story and its moments. We identified composers, musicians and artistes and have curated this album which we think fits beautifully with the narrative. Audiences have loved Boom Padi and Ae Pagli, and we can’t wait for them to discover the entire album.”

The foot-tapping, upbeat dance number Boom Padi, has cemented itself as the garba anthem of the year and has lit up the dance floors this festive season. The energetic song is sung by the highly accomplished Shreya Ghoshal and the very versatile Osman Mir; composed by Souumil Shringarpure & Siddharth Mahadevan, written by Priya Saraiya and choreographed by Kruti Mahesh. The album also features an electronic version of the song which has been sung by Yashita Sharma and rap by Lid Sidley. Soummil and Siddharth have composed another track for the album titled Songs of Celebration sung by Shashaa Tirupati and Osman Mir, with lyrics by Priya Saraiya.

There is the popular track Ae Pagli, which has been supervised by Akashdeep Sengupta, composed by Gourov Dasgupta, with lyrics penned by Kumaar. With this high-energy, romantic song, love takes a playful route with vocals by the multitalented Ash King and the gifted Prakriti Kakar.

The album also features the soulful and soothing number Kacchi Doriyaan, sung by the very talented Arijit Singh and Asees Kaur. Composed and written by Anurag Sharma, this track is going to be on everyone’s playlists soon. The album also features a reprise version of the song, with vocals by Aniruddh Anantha and Harjot Kaur.

Add to that, the album also features Buniyaad 2.0, by The Yellow Diary, which fits the storyline perfectly.

Listen to the entire soundtrack here.

Produced by Leo Media Collective and Amritpal Singh Bindra; directed by Anand Tiwari and written by Sumit Batheja, Maja Ma is a family entertainer, set against the celebratory backdrop of a traditional festival and a quintessential, colorful Indian wedding. Warm and funny, this light-hearted yet thought-provoking drama with unexpected twists and turns, features Madhuri Dixit in the lead, in a never-seen-before role. It boasts of an ensemble cast including Gajraj Rao, Ritwik Bhowmik, Barkha Singh, Srishti Shrivastava, Rajit Kapur, Sheeba Chadha, Simone Singh, Malhar Thakar and Ninad Kamat. Prime members in India and in more than 240 countries and territories can stream this highly-awaited Hindi Amazon Original movie from 6th October, exclusively on Prime Video.