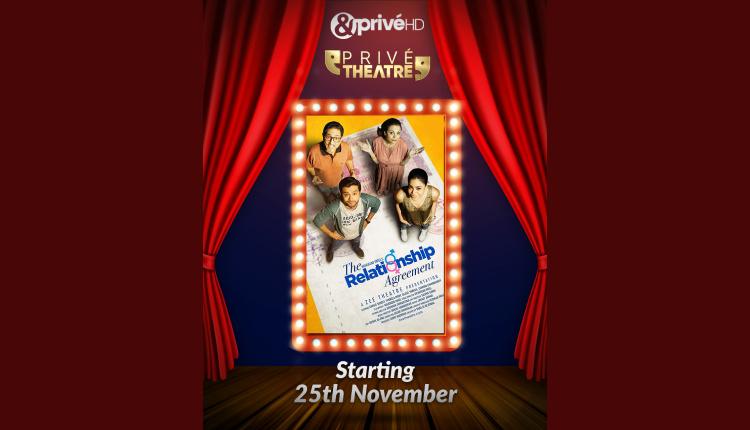 Zee English cluster channels &PrivéHD and Zee Café have been known to bring the best as per viewers’ choice. Catering to the 360-degree need of today’s times, the channels recently introduced modern plays in their programming through the property Prive Theatre. The channels make this possible through their partnership with Zee Theatre bringing alive the real stage emotions to the television screens giving an in-depth experience of theatre to the viewers. After showcasing Shriya Pilgaonkar, Hussain Dalal, Priyanshu Painyuli and Shikha Talsania starrer ‘Internal Affairs’ last week, the channels now bring ‘The Relationship Agreement’. The play premiers on &PrivéHD on Friday, 25th November and will run till next Thursday at the same time. Zee Café airs the play at 6 pm on Sunday, 27th November.

Starring Sumona Chakravarty, Darius Shroff, Sajeel Parakh and Pheroza Mody, the play is a funny take on modern-day relationships. A couple draws up a relationship contract to avoid the trials and errors of a relationship. Things get further complicated when their parents meet each other on social media and start dating. Will the young couple be able to stick to the agreement? A humorous take on modern relationships, the play is almost like a stand-up comedy and keeps the audience amused all through.

Boss Party Song Is Out Now, Megastar Chiranjeevi Gets Groovy

Upside Down Trailer Is Out