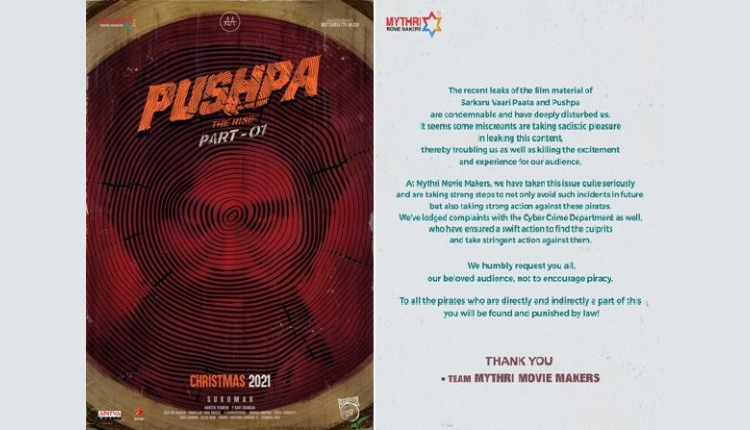 Iconic star Allu Arjun’s most anticipated movie Pushpa, is faced with piracy, the film’s first song came out before the scheduled time. The other day, a fight sequence got leaked.

Mythri Movie Makers, which is bankrolling the film, got alerted immediately and filed a complaint with cybercrime police and issued a statement online.

The official handle of Mythri Movie Makers captioned it, “We are deeply disturbed by the recent leaks of our movie material online. We condemn it and have lodged a complaint against the same in the cyber crime department. The culprits would soon be booked by the law. Please do not encourage piracy. – Team @MythriOfficial”

Directed by Sukumar, ‘Pushpa’ is one of the most awaited Telugu biggies this year. It is to be released in two parts. The first part is titled ‘Pushpa The Rise’.

The film is slated to hit the screens on Christmas 2021. Devi Sri Prasad has composed the music.

The first song that came out on August 13 received mixed reactions.

7 Most Promising Heart Healthy Foods To Add To Your Diet

Bhoot Police Trailer Out On This Date