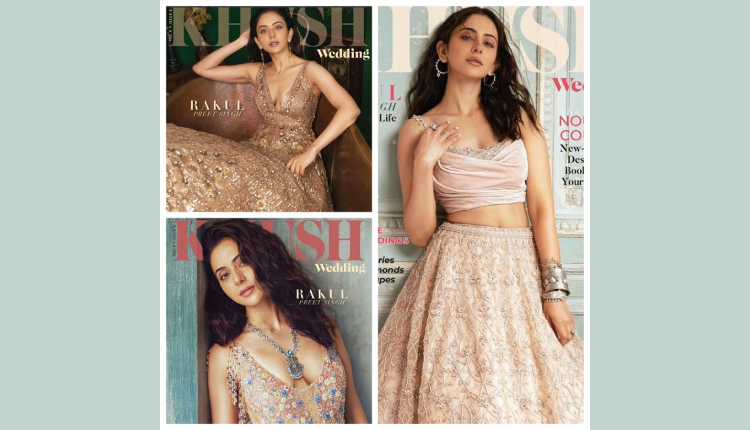 Charismatic, courageous and in love with life, actress Rakul Preet Singh channel a contemporary bride-to-be with a minimalistic approach on the latest cover spread of Khush Magazine.

Rakul Preet Singh is a successful actor, producer and influencer. On the latest cover spreads, she is seen sporting the season’s most lust-worthy wedding wear. With her relationship with Jackky Bhagnani being official, we might hear wedding bells soon enough!

Meanwhile, on the work front, Rakul Preet Singh is probably one of the busiest actresses across multiple industries. She has signed two Tamil films: S. Shankar’s vigilante-action film Indian 2 and the science fiction film Ayalaan opposite Sivakarthikeyan.

She has five Hindi films in her kitty. Such as the action film Attack, co-starring John Abraham and Jacqueline Fernandez in Lakshya Raj Anand’s directorial debut.

She is essaying the role of a pilot with Ajay Devgn and Amitabh Bachchan in Devgn’s own directorial Runway 34. She will also be featured in Indra Kumar’s slice-of-life comedy Thank God alongside Devgn and Sidharth Malhotra, and Anubhuti Kashyap’s Doctor G in which she is paired opposite Ayushmann Khurrana.

She will play the lead in the social family entertainer film Chhatriwali directed by Tejas Prabha Vijay Deoskar.

Ajith Starrer Valimai Trailer Is Out And Viral